Since AMD announced it was working with Samsung to release a new SoC featuring RDNA 2 graphics, new leaks and rumours about this chip have started to ramp up. The latest is based on the structure diagram of the supposed Exynos 2200, which suggests the SoC will feature six Compute Units.

The diagram shared by Ice Universe (via Wccftech) shows the 6-core GPU located on the top right corner of the SoC. As for the 4nm-based CPU cores, the leaker claims they are spread over the left side of the chip. 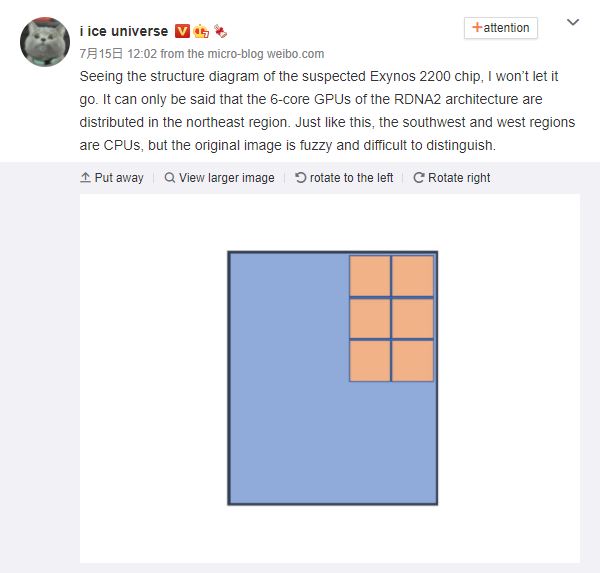 Compared to the Mali GPU used in other Exynos 2100, the Exynos 2200 would feature fewer GPU cores (14 vs 6). However, early benchmarks point to a 50% performance uplift, so we can only assume that each RDNA 2 CU offers more than double the performance of those used on the Mali-G78.

Apple’s M1 chip also features a low GPU core count, but that didn’t stop it from being the highest performing chip in most mobile graphics benchmarks. Nonetheless, comparing the number of GPU cores of the Exynos 2200 with any other chip won’t get us anywhere because this is the first time we see AMD using its RDNA 2 architecture in mobile SoCs.

KitGuru says: Based on what we know from RDNA 2 graphics, each Compute Unit may feature 64 Stream processors. If this is the case, this SoC will come with a total of 384 stream processors, which is still less than any RDNA 2 GPU currently on the market.