This week, AMD has announced that it is teaming up with Valve to bring support for AMD’s TrueAudio Next technology to Steam in an effort to improve audio in virtual reality content. By baking TrueAudio Next in with Steam Audio, virtual reality titles will get increased acoustic complexity and detail, with audio processing performance being sped up significantly.

TrueAudio Next (TAN) has two high-level features that maximise audio performance on PCs. For starters, there is Resource Reservation, allowing developers to reserve a portion of the GPU’s compute power for audio processing. In total, developers can dedicate up to 25 percent of a graphics card’s compute units for audio processing- load on the GPU can also be adjusted on a scene by scene basis. The second big feature is GPU Compute Convolution Algorithms, which enable developers to increase the ‘acoustic complexity and detail’ in their games and VR applications using a technique called ‘convolution reverb’. This reverb effect can model a wide range of acoustic environments, which will help developers create more accurate and immersive sounds to pull you into the game. 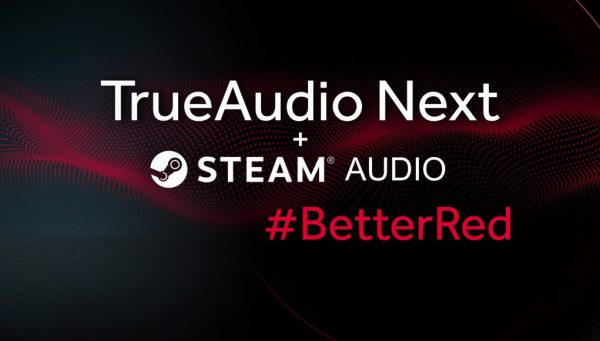 There are a few other features in place too, all with the end goal of enabling better performance and improving immersion for virtual reality. Greater Auditory Complexity gives developers the option of increasing the number of audio sources. By using TrueAudio Next, AMD claims that there will also be fewer unwanted pops, clicks and audio glitches, as rendering a complex scene won’t have an adverse effect on audio processing.

By moving audio processing from the CPU to the GPU, developers can reduce the fraction of time spent on the CPU by processing audio, freeing up those resources for other tasks, like AI and physics simulation. With audio no longer interfering with graphics or CPU processing, we should also see fewer stutters and frame drops, uplifting performance all around.

This feature will soon be baked in to Steam Audio, allowing a good number of developers to take advantage of it should they want to.

KitGuru Says: Whether or not this feature will prove popular among developers remains to be seen, but either way, it sounds like a decent step in the right direction. That said, you will need an AMD GPU to support this and as we saw in the latest Steam Hardware Survey, Nvidia still remains as the most popular choice.