It seems that all of the recent RX 500 series leaks are finally coming to a head as this week, AMD’s RX-500 series announcement presentation leaked onto the web, giving us a look at the all-new reference design and some performance numbers. 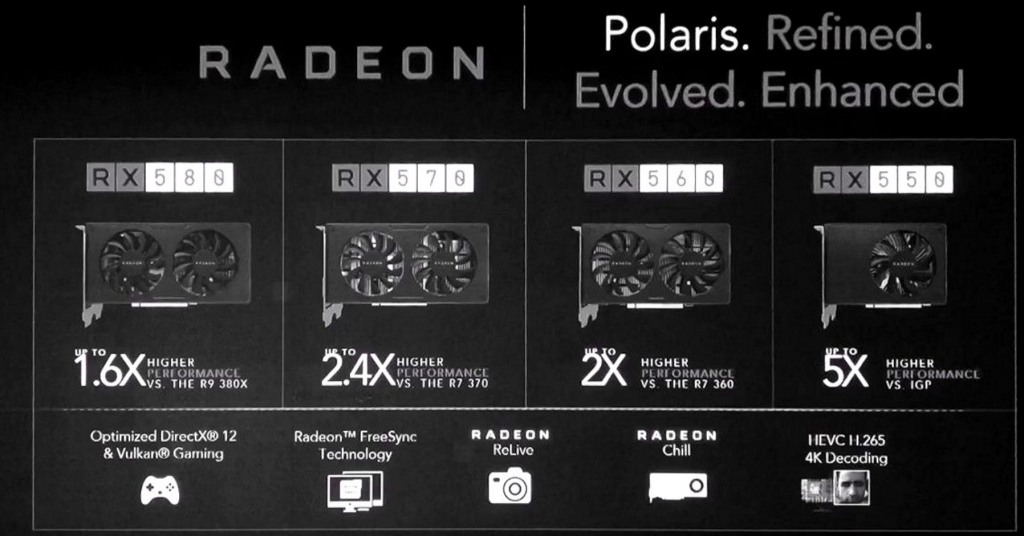 For starters, AMD is moving away from the usual ‘blower style’ reference cooler and is replacing it with a much more efficient dual-fan design. The new cooler is more akin to what you would expect to see from an add-in board partner, so it’s nice to see AMD stepping things up in this regard. As we can see from the image above, AMD is preparing four cards for release soon, the RX 580, 570, 560 and 550.

As with most new GPU presentations, some performance numbers are given. These benchmarks are run by AMD, so it will be best to wait for third-party reviewers and GPU buyers for a wider spread of comparisons and benchmarks. Still, the results seem interesting, though AMD is primarily comparing the RX 580 to the RX 380, cutting out the 400-series entirely from its comparisons. The leak comes from Chinese site Jisakutech (via Videocardz), the images aren’t the best quality- some of the graphs are harder to make out than others. However, from what we can see, AMD is pitching this as more of an upgrade to the R9 380x, skipping over any RX 480 comparisons.

The presentation also shows that AMD are targeting the RX 580 at those looking to break into 1440p gaming, without spending a fortune.

KitGuru Says: It seems that the RX 500 series announcement will be happening shortly. Are any of you currently holding off on upgrading? It might be worth waiting for new cards, especially if you are looking at buying an RX 400-series GPU.