Home / Component / Graphics / Is AMD releasing the Radeon Pro Duo at the end of April?

Is AMD releasing the Radeon Pro Duo at the end of April?

While AMD officially announced the Radeon Pro Duo several weeks ago at this point, boasting three times the power of a Titan Black, the company has yet to announce a release date for its dual-fury graphics card. However, one retailer may have jumped the gun, as a listing for the card has appeared online with a $2500 price tag and an estimated shipping date pencilled for the end of April.

This listing was found at PLE Computers in Australia and was pointed out to us by KitGuru reader Ethan Budge. Being an Australian store, that $2500 price tag would be AUD rather than USD, meaning in the US, the price translates to around $1941 and around £1350 here in the UK. Take pricing conversions with a pinch of salt though, as this doesn't take into account any additional costs, like VAT, which can vary from country to country. 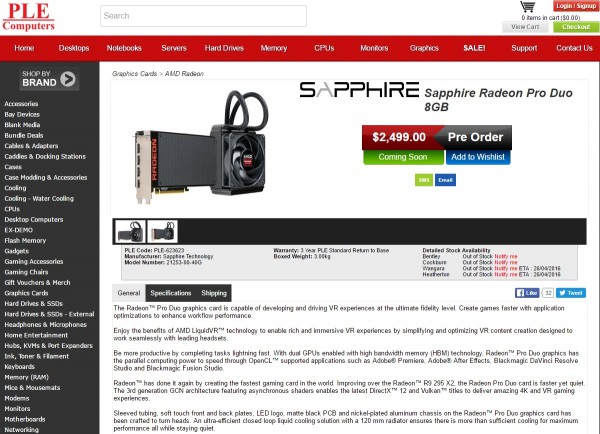 Back when the Radeon Pro Duo was first officially unveiled, we heard that the card would launch with a price tag of around $1500 in the US, or around £1250 in the UK once 20 percent VAT is factored in.

The final bit of information this listing gives us is a potential release date. Previous rumours have pointed to an end of April release date for this GPU and this listing seems to support that, with a 26/04/16 ETA in shipping. So if you're in the market for a new dual-GPU graphics card, then you may want to keep your eyes peeled at the end of the month, assuming this information is correct.

KitGuru Says: AMD has had this card planned since it first announced the Fury-line of GPUs last year but it looks like an actual release date may just be on the horizon. The R9 295X2 was a pretty popular card so it will be interesting to see if the Radeon Pro Duo can recapture that.