It seems that there might be some issues with From Software's anti-cheat system for Dark Souls III on the PC at the moment as according to numerous reports across the web, perfectly legitimate players are finding themselves banned. This is something that has happened before with a Souls game and a fix is already being looked at.

The big fear amongst some players is that they've been permanently soft banned without reason. This would mean that they can still go online but only interact with other players who have been soft banned, some of which could be actual cheaters in the game. 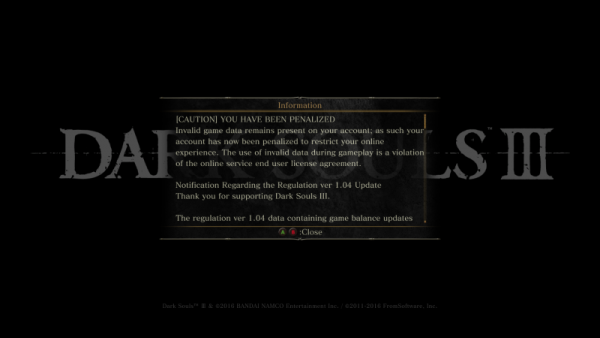 As Kotaku points out, there are some big posts about this over on Reddit and the Steam forums.  Over on the Reddit side, user Meowtock seems to have picked up on the fact that quite a few of the legitimate players getting banned found themselves in that position after suffering either a crash (which could corrupt save data and trigger the anti-cheat) or a disconnection from the server.

The Dark Souls community manager has tweeted out about this issue already, so From Software does know about the issue and hopefully some more information will be shared soon. It could be a while though, after all, we are also still awaiting an update on Dark Souls: Prepare to Die Edition on PC, which has mysteriously been offline for the last couple of weeks.

KitGuru Says: It seems that From Software needs to give its anti-cheat engine a bit of work, after all, it's not really fair to ban legitimate players or lump them in with potentially real cheaters in PvP. Are any of you currently playing Dark Souls III? Have you faced any problems?

Previous Is AMD releasing the Radeon Pro Duo at the end of April?
Next Ubisoft has fixed The Division’s Incursion loot glitch problem