AMD has updated its roadmap for Radeon graphics card launches over the next two years, revealing some interesting bits of information. For starters, Polaris is still on track to launch this year, but we apparently won't be seeing HBM2 feature on an AMD GPU until the Vega architecture releases in 2017, then in 2018, AMD will be introducing a new ‘Next Gen' memory standard with the Navi architecture.

Polaris 10 and Polaris 11 graphics cards are coming this year, featuring the 4th generation of GCN, with new HEVC encode/decode capabilities and support for HDMI 2.0/DisplayPort 1.3. These cards will presumably début under the Radeon 400-series banner, with rumours pointing towards an end of June announcement date. 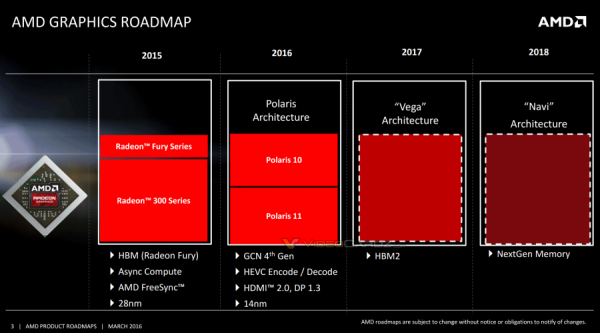 While previous reports suggested that we would see HBM2 graphics cards launching this year, it doesn't look like that will be happening, at least on AMD's part as the new memory isn't scheduled to appear until the launch of Vega graphics cards in 2017. That said, road maps can be adjusted and changed over time.

Finally, in 2018, AMD will be coming out with the Navi architecture, which will feature an unannounced Next Gen memory standard. Unfortunately, information on this is being closely guarded right now so we don't really know what to expect from it.

KitGuru Says: HBM hasn't been around for long but it looks like AMD will be bringing out even newer memory technology in just a couple of years. It will be interesting to see what else the Radeon team is cooking behind closed doors with Polaris and Vega. Are any of you currently waiting on new GPUs from AMD? Will you be upgrading this year?