AMD working on a new special edition driver like Omega

AMD first launched its Omega driver in December 2014. Almost a year has passed and now it seems that team red is working on a new ‘special edition' driver to launch this year according to new rumours. Radeon owners can expect the next big driver launch to happen at some point in November and if it is anything like Omega, we can expect quite a few new features.

Assuming that the new driver will be similar to Omega, we can expect some quality and performance improvements as well. 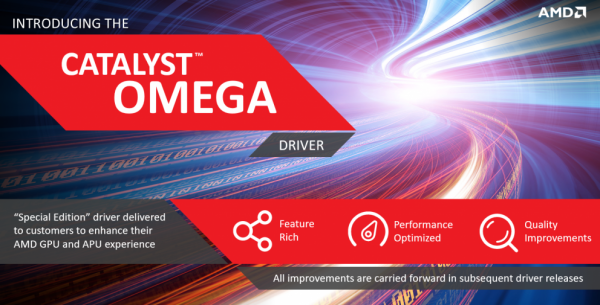 Unfortunately, aside from all of that, we don't know much. This information comes from Chinese site, HWBattle, citing its own source. The report doesn't go that in-depth on what we can expect from the driver either, all we know is that it is supposed to come at some point next month and will presumably have a new name, rather than being called Omega once again.

KitGuru Says: The Omega driver was a big launch for AMD last year so it will be interesting to see what it has planned for this year. I imagine some DirectX 12 optimizations will be on the cards, though we don't know any specifics just yet. Is there anything you would like to see AMD improve in their drivers?