WWDC took place last night and the all new Mac Pro redesign has officially been revealed. Over the last few years, Apple has been distancing itself from Nvidia and tapping AMD for MacBook and iMac GPUs and that tradition is going to continue, with the new Mac Pro featuring AMD Radeon Pro graphics cards ranging from Polaris up to 7nm Vega.

On the CPU side, Apple is still turning to Intel, with the new Mac Pro featuring Xeon chips ranging from 8-cores up to 28-cores with support for ECC memory and up to 1.5TB of RAM. On the graphics side, its all on AMD, with the Radeon Pro RX 580X sitting at the base of the lineup. From there, you can upgrade to Radeon Pro Vega or even Radeon Pro Vega II Duo- which is a dual GPU card using Infinity Fabric to link the two together on one PCB. 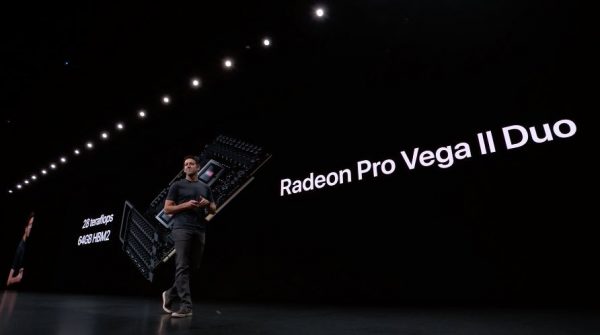 The Radeon Pro Vega II Duo is brand new and will debut with the Mac Pro later this year. It has been a while since we've seen dual GPU graphics cards in the spotlight. With the Vega II, you can expect up to 14 TFLOPS of single precision FP32 performance and up to 28 TFLOPS of FP16 performance, making it extremely powerful.

By connecting the GPUs through Infinity Fabric, the Vega II Duo is able to bypass the bandwidth limitations of PCIe and enable GPU to GPU communication speeds up to five times faster. It also enables lower latency memory access for the 64GB of HBM2 found on board, or 32GB per GPU. At this point in time, we don't know if the Radeon Pro Vega II Duo will be available outside of the Mac Pro but perhaps we'll get confirmation on that soon.

KitGuru Says: With two 7nm Vega GPUs on one PCB, you can cram a lot of performance into a smaller package and free up some PCIe slots for other expansion cards. The Mac Pro certainly delivers on high-end specs but it will be interesting to see how much it costs to upgrade one of these machines to one of these GPUs.