Gigabyte has a new GPU on the block. The company just announced its new GTX 980 Waterforce graphics card, featuring an all in one watercooling unit and unique GPU shroud to help stand out from the crowd. MSI and EVGA both offer similar offerings in the form of their SeaHawk and Hybrid series cards respectively. We have seen Gigabyte experiment with AIO cooled GTX 980s in the past.

All the way back in March, we got to take a look at the original Gigabyte Waterforce, which was a huge tower attachment that housed radiators for three separate GTX 980s, all cooled with AIO units with flex-tubing. 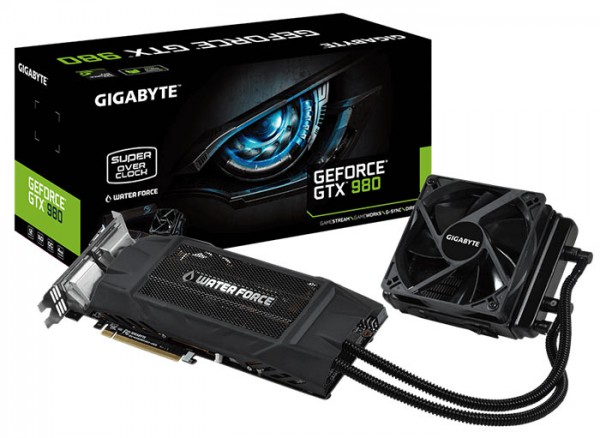 As you can see from the image above, Gigabyte has given its water cooled GTX 980 a bit of a redesign. It features the same tubing and 120mm radiator but it has dropped the blower style fan entirely, so it will be interesting to see how it stacks up temperature wise.

The GTX 980 Waterforce comes with 4GB of GDDR5 memory, as with all of the standard variants of this card. However, it does come with a higher out-of-box overclock, with a base clock of 1228MHz and a boost to 1329MHz.

KitGuru Says: At some point, I hope that we will see all AIB partners create AIO cooled variants of high-end GPUs, I imagine quite a few people will appreciate the option, particularly those who aren’t experienced with building custom water loops. How many of you water cool your GPU? Do you like the idea of buying an AIO-cooled GPU?