Gigabyte has prepared an update for its entire line-up of Nvidia Maxwell based graphics cards, ranging from the entry-level GTX 950 all the way up to the Titan X. All updated GPUs will fall under the new ‘Xtreme Gaming' brand, which features an updated version of the WindForce triple fan cooler. Interestingly enough, the Titan X card will also feature a custom cooler, while most other manufacturers have been sticking with the reference design.

The WindForce 3X cooler is rated to dissipate up to 700W worth of heat, so it is promising high performance right off the bat. This cooler will be applied to the GTX 970, 980, 980Ti and Titan X. However, there is also a WaterForce version of the 980Ti coming, which we have reported on before. You can see the whole line in the image (via: wccftech) below: 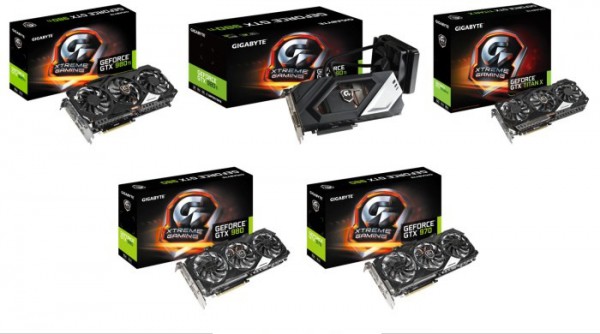 The fans on the WindForce X3 cooler now have RGB LEDs, so you can make your graphics card glow and fit the colour scheme of your build. The beefy cooler also means higher out of the box overclocks, with the GTX 970 and 980 having base clocks of 1190MHz and 1241MHz respectively. The GTX 980Ti has a base core clock of 1216MHz and finally, the Titan X will have a base core clock of 1266MHz.

Prices and launch dates for these new cards aren't confirmed just yet, though given that we already have pictures and most of the relevant specification info, we should learn more soon.

KitGuru Says: The WindForce cooler has always been quite good in my own personal experience. Have you been looking to pick up a new graphics card before the end of the year? Do any of you run a WindForce GPU already?