The GTX 1050Ti has been a hot topic recently, with new details leaking out pretty much every week over the last month or so. If all of our previous coverage wasn't enough to convince you that the GTX 1050Ti is a very real thing, then maybe MSI can convince you, as the GPU makes an appearance in the company's Gaming App changelog.

We were initially pointed towards this leak by KitGuru reader Marius Streuti over on our Facebook page. I went over to the MSI gaming app page myself and double checked the information to verify and sure enough, the Gaming App has been updated several times recently to adjust clock rates for the unreleased GTX 1050Ti and add support. 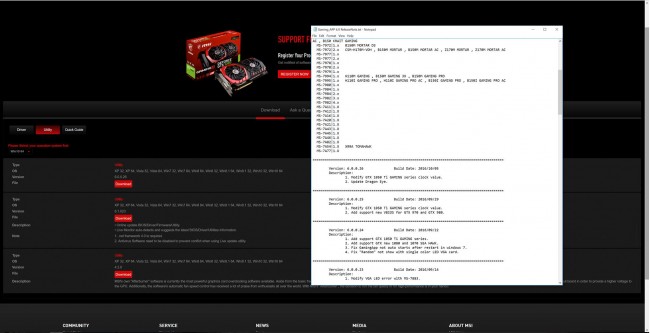 When you download the MSI gaming app in the utility section of the GTX 1080 product page, you will notice a ‘release notes' file. Support for the GTX 1050Ti was added on the 22nd of September and clock rates for MSI's version of the card have been adjusted twice since then, with the most recent change happening yesterday.

If you want to read up more on the GTX 1050Ti, then you can find some specs and benchmark leaks on our post from yesterday, HERE.

KitGuru Says: Right now current rumours are pointing to the GTX 1050Ti launching within the next two weeks, so keep an eye out if you are looking to buy a new budget GPU soon.