A few weeks ago, Intel posted a video showing the first Arc Alchemist A750 graphics card benchmarks. For reasons unknown to us, that video has since been privatised and a new video has been posted in its place. In the new video, we see different gameplay footage compared to the original, but performance claims appear to be the same.

In the new Intel Arc A750 performance showcase video, Intel graphics marketing lead, Ryan Shrout, is joined by Tom Petersen to discuss the graphics card. Another change this time is that Control gameplay is shown and Cyberpunk 2077 gameplay is removed, although the performance slide shown in the video does still include Cyberpunk 2077.

The Intel Arc A750 is one of two upcoming desktop graphics cards expected to become available this summer. The A750 is being positioned to go up against the RTX 3060, while delivering higher performance in some games. According to Intel's performance graph, which you can see below, the A750 Limited Edition can beat an RTX 3060 by up to 17 percent in a selection of five titles, including F1 2021, Cyberpunk 2077, Control, Borderlands 3 and Fortnite. 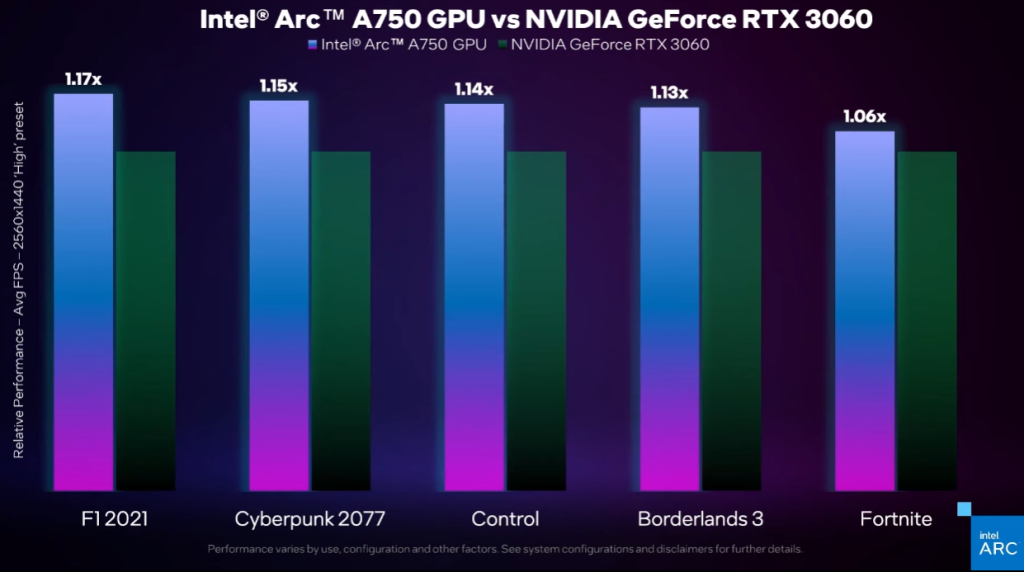 Early on in the video, Peterson points out that the A750 is going to deliver on performance per dollar, but Intel isn't sharing specific pricing information at this time. The main benchmark included in the video shows Control running at 1440p with the high graphics preset and ray-tracing off. The GPU is able to keep the frame rate above 60FPS in the clip shown, and according to Intel's graph, the A750 beats the RTX 3060 be 14% in Control.

While the previous video was removed and replaced with this one, it does seem that Intel is planning to do more of these leading up to launch. Currently, Intel is still planning to launch the first Arc Alchemist desktop graphics cards ‘this summer', so expect more information pretty soon.

KitGuru Says: Intel will want to get its new graphics cards out sooner rather than later, as new competition from Nvidia and AMD is just around the corner.