Japanese manufacturer ELSA shows off its own custom GTX 980

I’d be surprised if any of our readers told me that they had heard of ELSA before. Apparently, ELSA is a Japanese graphics card manufacturer and it is all set to release its own custom GTX 980, featuring 4GB of VRAM, a 1253 MHz boost clock and a stealthy black twin fan cooler.

Elsa’s GTX 980 S.A.C is likely going to be a Japan only release, at least for now. The company has been around since 2003 but hasn’t been consistently releasing GPUs every time there is a series update. The most recent release I can find from them is a GTX 680 from 2012. 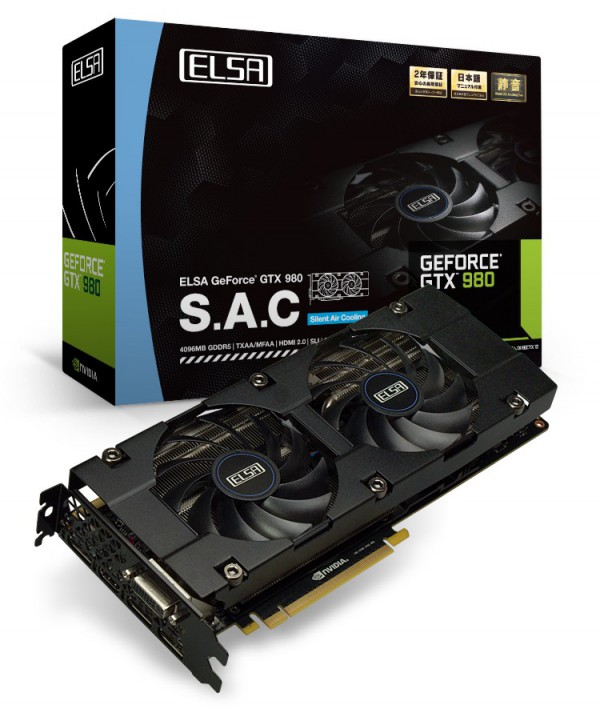 The S.A.C cooler will supposedly offer silent air cooling and should be easy to clean as the shroud is suspended by two thumb screws. allowing it to easily be pulled off to remove dust. The new custom GTX 980 doesn’t have an exact release date just yet or a price tag but it will likely remain exclusive for Japan for a while so reviews may be hard to come by.

Update: ELSA Technology was originally a German manufacturer. However, in 2002 the company filed for bankruptcy, the ELSA featured in this article was founded in 2003, shortly after the original went bust.

KitGuru Says: Another custom cooled GTX 980 has been revealed. Have any of you guys heard of ELSA before? Better yet, have you ever owned one of its GPUs?