Back in November, Nvidia launched the desktop version of the GTX 1050Ti and GTX 1050, bringing the Pascal architecture to budget-minded desktop gamers. However, there are those out there that require or prefer the portability of a laptop, so this week, Nvidia has launched the GTX 1050Ti and GTX 1050 for gaming laptops, with six models from the likes of Asus, Alienware MSI and more already announced.

The laptop editions of the GTX 1050/Ti are based on the same silicon found in the desktop version, though this one packs some additional features like Nvidia Battery Boost, which aims to offer longer battery life for gaming notebooks even when unplugged. 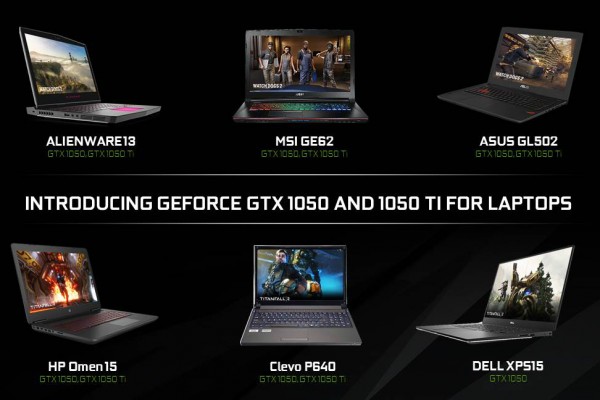 The GTX 1050Ti for laptops aims to offer up to three times the performance and power efficiency of previous-generation GPUs, as well as deliver a solid 1080p/60 frames per second experience. G-Sync support is available though you will need to find a laptop with a G-Sync display first, also if you want to put your laptop’s thermal solution to the test, then you can also overclock the GPU.

There will apparently be over 30 laptop designs shipping from OEMs within Q1 2017 alone and at CES this week, attendees will be able to see six models in action including the Alienware 13, MSI GE62, Asus GL502, HP Omen15, Clevo P640 and Dell XPS 15. All of these models will also support Intel’s newest Kaby Lake CPUs (we reviewed the desktop 7700K and 7600K today), and some of these laptops will go on sale this week.

KitGuru Says: If you are looking to pick up a gaming laptop under the £1000 mark, then it looks like you will have plenty of GTX 1050/Ti options to choose from over the next few months. Are any of you currently in the market for a gaming laptop?