Nvidia has today launched a new GPU module known as the Jetson TX1. It's small enough to fit in the palm of your hand but powerful enough to bring GPU accelerated artificial intelligence to robots, drones and other devices. The Jetson TX1 is based on Nvidia's current Maxwell architecture, which has been highly rated since its launch in September last year.

The module includes one Maxwell GPU capable of pushing 1-teraflop per second of compute power, a 64-bit ARM A57 chip, 4GB of LPDDR4 RAM and a gigabit Ethernet port- though it does also support 802.11 2×2 ac WiFi. 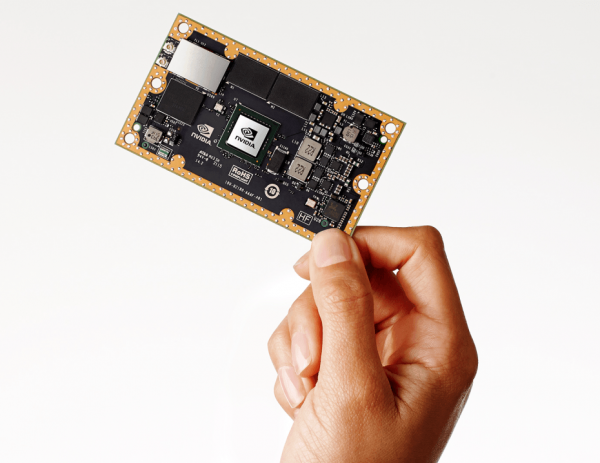 The Jetson module is designed to work with the Linux based SDK and power machine learning or AI activities, in order to create smarter applications and devices. Speaking at the company's announcement event (via Venture Beat), Nvidia CEO, Jen-Hsun Huang said: “The ability for computers to learn, the ability for computers to write software itself and do seemingly amazing things, artificially intelligent things, is revolutionizing web services”.

Huge companies like Microsoft, Google, Amazon and IBM all buy GPUs from Nvidia from time to time in order to power their own machine learning and artificial intelligence work. The Jetson TX1 development kit will launch at $599, though the cost is reduced to $299 for those in education.

KitGuru Says: It looks like Nvidia's Maxwell architecture is going to be powering AI applications now. Are any of you interested in AI and machine learning? It has become a major point of research amongst tech companies over the last couple of years.