PowerColor’s RX 5700 XT Red Devil has already been crowned as one of the best custom AMD GPUs available on the market right now, but an upgrade is on the way. In September, PowerColor began teasing a liquid-cooled version of the card and now, it has been properly unmasked.

The PowerColor Liquid Devil is on the way, with the company touting it as the ‘world's fastest Navi', with more details to come on the 19th of November. As previously thought, the PowerColor Liquid Devil will indeed use a pre-installed custom water cooling block from EK-WB. The block is partially clear so you can see coolant running through it, while a black cover with Power Color's ‘Devil' logo covers the rest of the block. 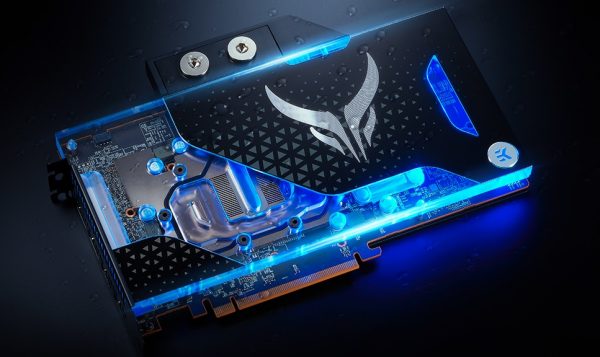 You can see the card for yourself in the image above, which was originally shared on PowerColor's Facebook page. In the teaser image, the lighting is set to blue but we would be surprised if RGB wasn't included.

Pricing, out of the box clock speeds and availability are still to be determined but we'll be keeping an eye out for all of that when more details drop on November 19th.

KitGuru Says: The Red Devil RX 5700 XT was an excellent showcase for AMD's current top-end Navi 7nm GPU. With the Liquid Devil, we could see even better performance thanks to lower temperatures. Are any of you currently looking to pick up an RX 5700 XT? Would you opt for a water cooled version like this?