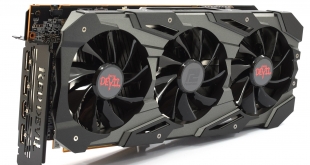 Custom Navi graphics cards are coming thick and fast now. We've already looked at solutions from Sapphire and MSI, and today we turn to PowerColor with its RX 5700 XT Red Devil. The Red Devil series has long been popular with enthusiasts for its beefy coolers and custom PCBs, and the RX 5700 XT model in for review is no different – it sports a thick, triple-fan cooler and beefed-up power delivery alongside a factory overclocked core. With an MSRP of £449, is PowerColor onto a winner?

One of the first things you'll notice about the PowerColor RX 5700 XT Red Devil – apart from its sheer size – is the new colour-neutral design. The Red Devil cards, as the name suggests, have always had prominent red accents on the shroud but here PowerColor has toned things down significantly. The 5700 XT Red Devil is also the first of the series to sport any form of RGB lighting.

Aesthetics aside, PowerColor has applied a decent factory overclock to the card, with a rated game clock of 1905MHz. Alongside that, there is dual-BIOS functionality allowing users to choose between the ‘OC' BIOS for maximum performance, or the ‘Silent' BIOS for lower noise levels. This will be a focus of our review today. 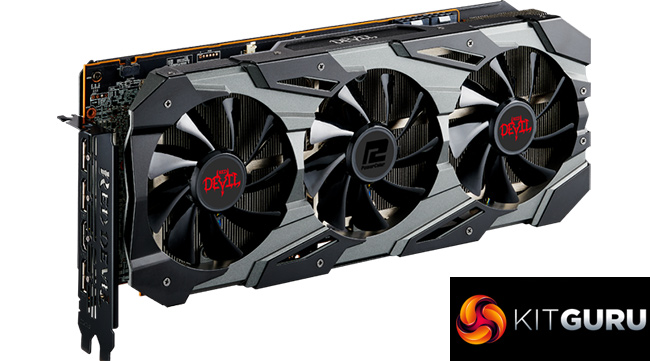 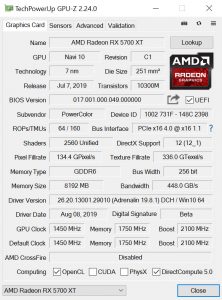 Diving into the core spec of the card, based on the 7nm Navi GPU, of course this 5700 XT has 40 Compute Units and 2560 Stream Processors, with 8GB of 14Gbps GDDR6 memory. We already mentioned the 1905MHz rated game clock, which is an increase of 150MHz over the reference card. Do bear in mind, however, that game clock is only the ‘expected' GPU clock when gaming, and frequency is very dynamic with the new Navi cards. We will look at actual clock speed under load later in this review.

Another point to note is in regards to total board power. By default the card ships with the OC BIOS enabled, which has a 220W power target (interestingly 5W less than reference). By moving to the Silent BIOS, however, the card engages an 180W power target. PowerColor hasn't disclosed clock speeds for the Red Devil using the Silent BIOS, but it's a certainty that the card will run slower with 40W less power available to it – this is also something we will examine later in the review.