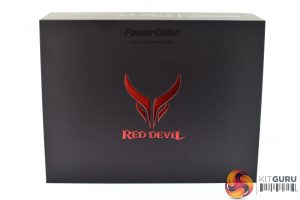 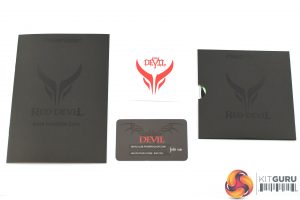 I received the PowerColor RX 5700 XT Red Devil in the form of the limited edition bundle – this has different packaging and a few added extras to the regular retail version, but the graphics card itself is the same. The limited edition box is jet black, with just the Red Devil logo smack-bang in the middle.

Inside, the first few accessories include a quick start guide, driver disk, sticker, and a ‘Devil Club’ invitation card. 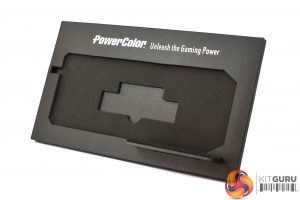 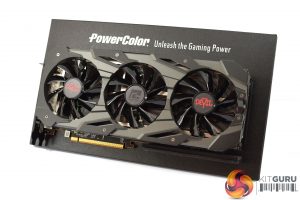 My sample also came with a special graphics card holder, but we were told this is only included with press samples – so you won’t get one if you buy a Red Devil. 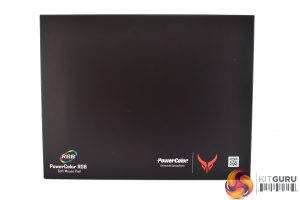 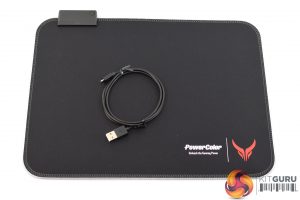 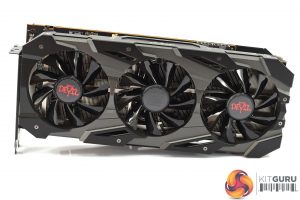 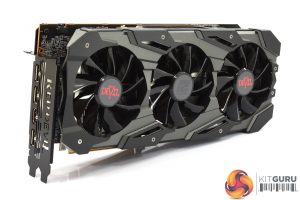 Moving onto the card itself, as we mentioned on the first page PowerColor has moved away from its bold red design of previous Red Devil cards, and the 5700 XT Red Devil is much more colour neutral, with a black and gunmetal grey shroud. There are still two small Red Devil stickers on the outer fans, but other than that the rest of the card is colour neutral.

Build quality is good for a card of this price. The gunmetal section of the shroud is plastic, but it feels solid and there is little flexing to the main body of the card. The black areas on the card, however, are metal plates that have been screwed into the shroud and this adds further rigidity. No, it’s not as premium as the all-aluminium MSI Evoke OC, but it doesn’t feel cheap either.

As for the those fans, we obviously have three and each measures 90mm across. I’m not too keen on the glossy plastic used for these as I feel it cheapens the overall look slightly, but unless you mount the card vertically you won’t see them once the card is installed. There is also a fan-stop mode where the fans stop spinning once GPU temperature drops below 60C. 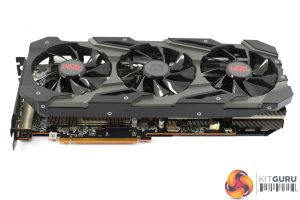 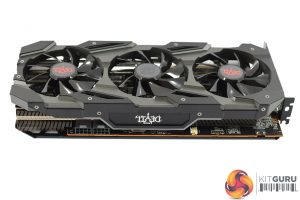 The Red Devil is the biggest custom Navi card we have reviewed so far. It measures 300mm x 132mm x 53mm, so it’s effectively a triple-slot card. At 30cm long, too, this may cause some issues if you have a compact case. 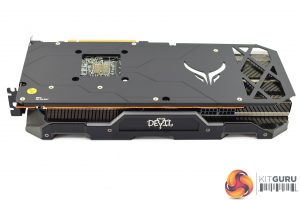 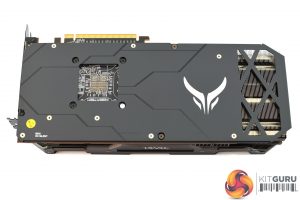 Along the front side of the card we find the Red Devil logo (one of the RGB zones) which sits below a RGB LED strip. To the front left, just by the I/O bracket, we can also see the dual-BIOS switch. Out of the box, the switch is positioned towards the I/O bracket – in OC mode – but you can push it over to the Silent BIOS if you prefer.

PowerColor have also fitted an attractive backplate to the Red Devil. It’s made of metal and PowerColor says it measures 1.5mm thick, though you can see the cut-out behind the GPU core. There’s also an interesting grille/mesh section at the end, designed to increase ventilation from the back of the card. Lastly, the logo positioned just to the left of that grille section is another RGB zone. 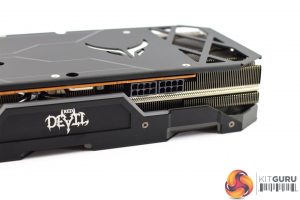 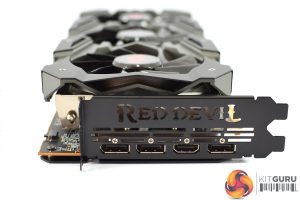 Elsewhere, PowerColor has also adjusted the power requirements of this card – you’ll need 2x 8-pin connectors to run it.

Video outputs are the same as reference, with 3x DisplayPort and 1x HDMI. PowerColor has also placed three red LEDs just above these ports, meaning you can easily find them if you’re trying to connect a display cable in the dark. 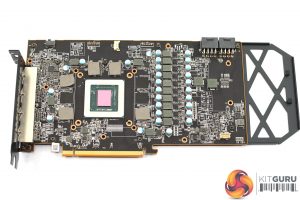 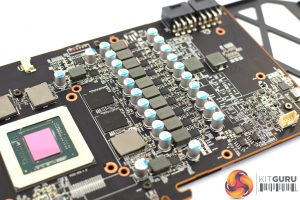 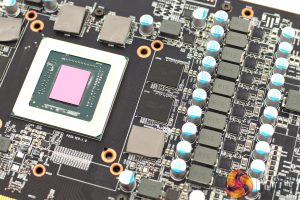 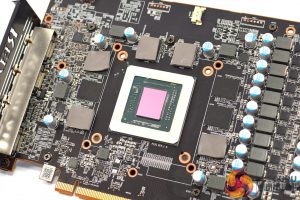 Opening up the card to look at the PCB, we can see how PowerColor has tweaked the design – most notably, the Red Devil sports a 10-phase power delivery for the GPU, up from the 7-phase reference design. It’s still a 2-phase solution for the memory, however.

The memory itself is from Micron, with each chip labelled ‘9KA77D9WCW’. Lastly, we can also see the 7nm Navi GPU sitting in the middle of the PCB. 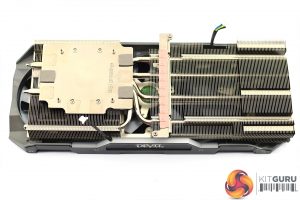 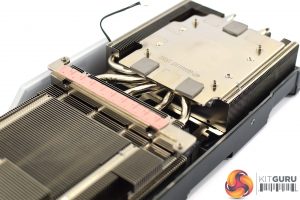 As for the cooler, this is a pretty hefty unit that is comprised of two separate fin stacks. 5x 6mm heatpipes draw the heat away from a single baseplate that contacts with both the GPU and the VRAM. There is another, much thinner coldplate to cool the MOSFETs just to the right of this.