It has been a couple of months since the RX Vega 56 and RX Vega 64 first hit the market in reference form. Stock levels and pricing seem to have calmed down a bit and now, it looks like we are starting to see some more custom-cooled variants pop up on the web. This week, XFX began teasing its own custom RX Vega card, which may end up being the second one on the market, following the Asus ROG Strix edition.

XFX exclusively makes AMD graphics cards these days. The AIB has put together an all-new custom cooler for RX Vega. The shroud comes in an odd shape with a dip in the middle of the plastic conjoining the two fans. You can see what the cooler looks like in the images below: 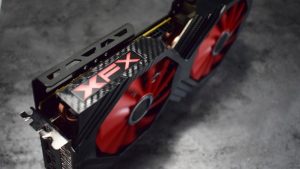 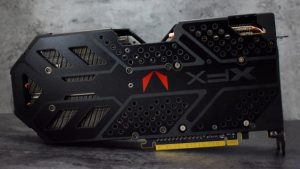 The backplate design has a distinct look to it and the heatsink in use for the GPU seems quite hefty. The PCB doesn’t run the full length of the card, but with the heatsink and backplate in place, it’s hard to really notice.

The only problem here is that there is no release date. XFX has also not revealed clock speeds, so we don’t know exactly when this custom RX Vega will hit the market, or whether it will be marketed as the ‘Black Edition’ or something new entirely.

KitGuru Says: Since launch, only one other custom RX Vega has hit the market, which is a shame. Custom cooled versions could have been great for reducing temperatures, raising clock speeds and giving us a better outlook on Vega’s performance. Hopefully this XFX model is just the start though, with more to follow.