While we’ve been on a steady flow of Polaris RX 580- and 570-series reviews this week, these have been stolen the attention from other entries in AMD’s line-up. AMD did launch something else on the 18th of April, only it passed by very discreetly because it was overshadowed by AMD’s mainstream offers, and this was the Radeon RX 550. The card that is intended to sate the hunger of more lightweight gaming experiences like eSports (CS:GO, Rocket League, DOTA, LoL, etc…) or some triple-A titles in very low graphics settings.

The Radeon RX 550 is the budget-minded Radeon, with a $80/£80 (starting) price tag, and all the features of its more expensive brethren, but lacking the overall performance. The Radeon RX 550 is built on the same 14nm FinFET process, tiny in size (just 101mm2) and sports just 8 compute units/32 TMUs. It has 512 stream processors with a base/boost clock of 1GHz/1183MHz, which translate into 1.2 Tflops of compute power. Its 2/4 GB GDDR5 RAM is rated 1750 MHz (7000 MHz effective) but strapped to a 128-bit memory bus. It’s so power-thrifty that it sips just 50W directly from the PCIe slot without the need for additional PEG connectors for power.

As you can imagine, this will not break any world records, but today we’ve received word from several of AMD’s AIB partners that they have released their own (non-reference?) designs for the runt of the litter. 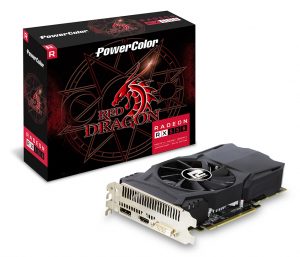 PowerColor announced what sounds like a little overkill for a budget card: the PowerColor Red Dragon RX 550 2GB, which clocks a rather “tame” 1190 MHz boost clock. It’s plain plastic shroud and fan don’t really live up to the Red Dragon branding.

MSI launched the AERO ITX 4G OC and the AERO ITX 2G OC, differing only in the RAM capacity. Both come with plastic shroud and single fan for cooling, and have a 1203 MHz boost clock. You’ll be interested in the HTPC potential of thse cards, as both have a fairly small footprint.

HIS, which was unheard of at the RX 580/570 launch, joined the party with the announcement of its HIS RX 550 GREEN iCooler OC 2GB and 4GB SKUs. They are identical in specs to the RX 550 reference designs, unfortunately.

Sapphire, known for its innovative cooling and affordable pricing released the Sapphire PULSE Radeon RX 550 2GD5 and 4GD5, and yes, you guessed correctly, a 2GB and 4GB version. These come with stock plastic shroud and cooling, and boost clock of 1206 MHz.

While none of the partner launches (except maybe MSI’s ITX design), are going to convince hardcore gamers or turn modders’ heads, they are substantially better than your typical iGPU or APU, suggests AMD. It will also deliver the latest set of hardware features like DirectX 12 or X.265 Decode/Encode, which has become a staple of HTPC systems. On the other hand, for the price tag, you might as well be considering going to the RX 460 which is much more powerful and costs about the same.

KitGuru Says: It seems to us, that these designs are closer to the reference than you’d expect to see, with only MSI innovating in terms of form factor. Clearly there is little in terms of leeway for AIB partners to improve on this. If you’re on a tight budget and are happy with casual gaming, the RX 550 will do right by you, but we’re quite confused as to the pricing on these cards, as the only competitor they’ll find is AMD’s own (and more powerful) Radeon RX 460.