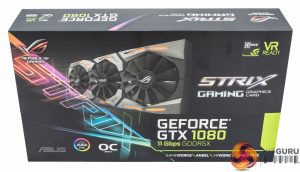 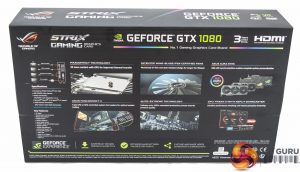 Packaging for the ASUS GTX 1080 ROG Strix OC 11Gbps is well-presented and gives a concise overview of the product’s key features including a nickel-plated contact plate for the cooler, IP5X-certified fans, ASUS Fan Connect II, AURA RGB and Auto Extreme. 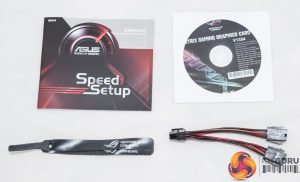 ASUS has a slight advantage over MSI due to the implementation of a neutral-looking black colour scheme. There is no red, yellow or any other colour, for that matter, to spoil the seamless integration into a variety of different builds.

The triple-fan design is prominent and should give ASUS an airflow advantage over the dual-fan design of the MSI GTX 1080 Gaming X Plus. Like virtually all graphics cards in this segment the GPU fans switch off when the temperature is below a temperature of around 55-60 degrees Celsius.

The ASUS fans are 90mm units and have IP5X certification which should mean a lower probability of failing over time from dust build up inside the bearing. The triple-fan design comes with a size penalty as the ASUS card measures in at 30cm long, 31.5cm including the rear I/O, and 12.5cm high, 14.5cm when including the rear I/O. It is longer than its MSI rival but not as tall since the 90mm fans do not require as much vertical space as MSI’s 100mm fans.

The ASUS card creeps slightly beyond a dual-slot design but not by any significant amount, it can probably be called a “2 and a third” slot card if you were being very picky about compatibility.

At 1,228g, 1.2kg, the ASUS card weighs in at 128g more than MSI’s card but the reinforced backplate on the ASUS card will prevent sagging from occurring over time. 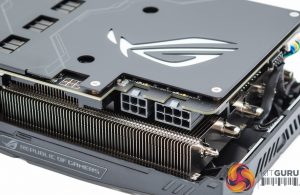 ASUS equips a backplate but it’s not full cover as it has cut-outs at various locations including the backs of the VRM components and a 6pin PCIe solder point that isn’t used, which looks a little untidy. There is, however, an ROG logo which is included in the RGB LED setup for nifty lighting effects.

Power is drawn through a 6 pin and an 8 pin, Nvidia’s reference design uses a single 8 pin.

The rear I/O also differs from the reference Nvidia design but ASUS does well to cover all the bases with dual HDMI 2.0 (useful for VR), dual DisplayPort 1.4 and a single DVI-D dual-link.

The cooler seems to vary from the unit KitGuru inspected with the ASUS ROG Strix OC GTX 1080 (A8G) back in late-2016. For starters there is a Nickel-Plated contact block, rather than direct contact copper heat pipes, which should lead to slightly increase effectiveness of the heatpipes that do not sit directly above the GPU core.

The heat-pipe arrangement is also slightly different with six 6mm heat pipes versus four 8mm and one 6mm on previous designs. 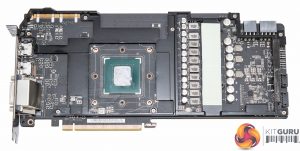 The PCB layout appears to be identical with a 10 phase (8+2) design that is assembled using a fully automated process, ASUS Auto Extreme, that should prevent inconsistencies and imperfections caused by human assembly error. ASUS continues to include two 4 pin fan headers that can control a pair of fans in line with the GPU temperature. This is rather than the motherboard fan headers which control fan behaviour in relation to CPU or motherboard temperature sensors.