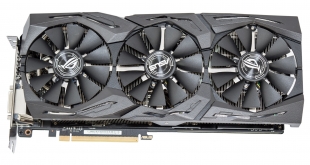 Nvidia graphics card partners have refreshed a number of GTX 1080 models to take advantage of faster 11Gbps Micron memory. ASUS were one of the first companies to participate in the new scheme from Nvidia that was announced at its 2017 GDC conference.

ASUS joins MSI in creating a new model specifically for 11Gbps memory modules. Nvidia partners are only allowed to include these uprated memory modules in overclocked models and so ASUS has rolled out the new memory configuration with its Republic of Gamers Strix OC graphics card.

There are a number of other ASUS GTX 1080 models in the picture, which can get a little confusing – but for all intents and purposes this refreshed model is the best ASUS GTX 1080 currently on sale. Frequencies aside the 11Gbps ASUS card is highly similar to the ASUS GTX 1080 ROG Strix A8G KitGuru tested last year. 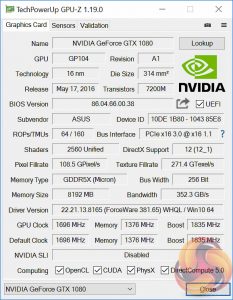 Out of the box the ASUS graphics card will run in Gaming mode, the default mode, which gives a 1695MHz base and 1835MHz boost, with 11010MHz memory. Installing the ASUS GPU Tweak II software will enable the end user to toggle an OC mode that increases frequencies to 1721MHz base, 1860Mhz boost and 11100MHz memory.

Pricing is higher than most of its rivals with ASUS selling its new 11Gbps GTX 1080 close to the £600 level in the United Kingdom – somewhat exuberant pricing given that GTX 1080 Ti graphics cards currently start from around £650.