When we reviewed the original NZXT Kraken X-3 and Z-3 coolers earlier this year, we found the thermal performance was very impressive and they didn’t disappoint in the looks department either. One feature that is missing from the original Kraken X-3 and Z-3 AIOs, however, is RGB fans. Fear not, as NZXT is back to please the RGB enthusiasts with fully blown RGB versions of the Kraken X-3, but can these new models perform just as well as their older siblings? We find out today.

Explaining all the details of these new NZXT Kraken X-3 RGB AIOs may be repetitive reading for those of you who caught our original review of the Kraken X-3 and Z-3 series earlier this year, if that applies to you then you might want to skip past this introduction as the only significant change with this new bunch of AIOs is the addition of RGB fans, and of course the inclusion of the 240mm Z53 which was missing from the original launch in July.

The addition of the Z53 to the Kraken AIO range means you can now enjoy the benefits of a CPU block LCD screen with a 240mm AIO, which is probably the most commonly used size. The new NZXT Kraken Z53 will set you back around £199 which means you are paying a premium for having the luxury of an LCD screen as this is the extreme top end of the 240mm AIO price range. However, if the performance of the 280mm and 360mm Z-3 and X-3 coolers are anything to go by, the 240mm Z53 should be up there with the best.

Our main focus of this review is the new Kraken X73 RGB, as mentioned previously the only difference with these coolers compared to the originals is the new RGB fans. Gone are the Aer P 120mm units with interchangeable colour trims that came with the regular X-3 AIOs, and in are the new Aer RGB 2 fans with an opaque diffuser ring housing eight RGB LEDs. 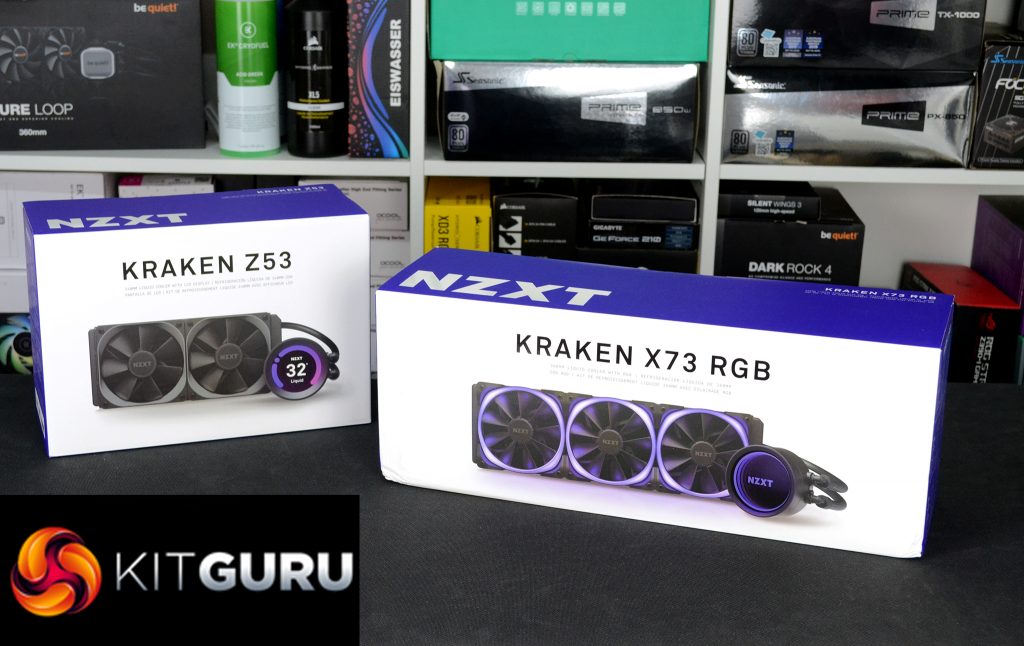 Another noticeable difference between the two types of fans is the speed range, The original Aer P 120mm fans offer a range of 500-2000 RPM while the new Aer RGB 2 120mm units speed range is reduced to 500-1500 RPM. The new Aer RGB 120mm fan also features 2 more blades and a sharper blade angle compared with the Aer P, so it will be interesting to see how these changes of blade design and rotational speed affect thermal performance.

Other than those changes to the fans, the core design of the X-3 RGB coolers remains identical to the non-RGB versions using the 7th generation Asetek pump/CPU block and radiator combination with the usual features such as premium braided reinforced tube sleeving, articulating 90-degree fittings at the CPU block side and of course the Kraken X-3 RGB includes the same infinity mirror CPU block top cover design as the original Kraken X-3.

Users of the Z-3 series pay a premium for the LCD screen compared with the comparable X-3 counterparts. The same applies to this new X-3 RGB range, the original X73 (non-RGB) 360mm flagship will set you back around £159 in the UK, another £40 is added on top of that price for the new Kraken X73 RGB which may feel like a price worth paying to RGB enthusiasts for full RGB integration.

The NZXT Kraken X73 RGB is available to pre-order in the UK now, priced at £199.99 which may be a large chomp out of most people's whole system budget, but if the performance of the regular Kraken X-3 series is anything to go but, it may be an expense worth forking out for.