AMD’s CPUs have taken over the workstation market, made huge inroads for servers and cloud providers, and its Instinct GPUs are now being used in the fastest supercomputers in the world, like the Oak Ridge Frontier and Nuclear Security Administration’s El Capitan. But it still plays a very quiet second fiddle to NVIDIA in the mainstream workstation graphics market. AMD is still chipping away, though, and each generation gets that little bit closer to a serious challenge. With the latest Radeon Pro W6000 series, AMD is bringing its 7nm RDNA2 architecture to the professional arena, and we got our hands on the top W6800 model.

So the W6800 has 67 per cent more Stream Processors than the W5700, but the big news is just how much memory it has on board – a whopping 32GB. This is GDDR6, delivered on a 256-bit bus with 512GB/sec bandwidth. Putting this in perspective, this is four times as much as the W5700, twice as much as any previous professional AMD card apart from the Apple Mac Pro-only Radeon Pro Vega II, and more than any NVIDIA Quadro except the RTX 8000, A6000 or GV100. 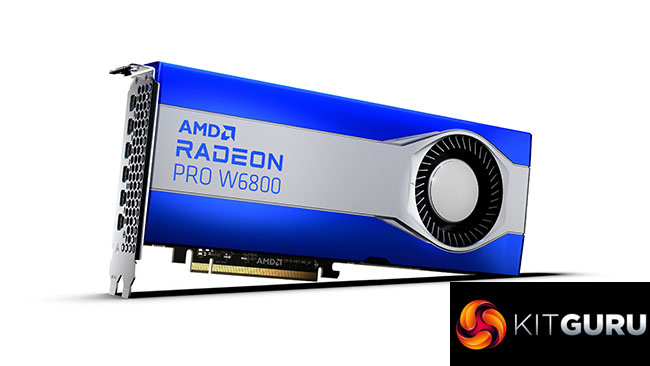 The W6800 wasn’t listed for sale on any UK website at the time of writing, but in the US it is available for $2,499 (£1,797) which is in the same ballpark as the NVIDIA Quadro RTX A5000. It has a third more memory than the latter, but how does it compete on performance? We managed to get our hands on all the latest Ampere-generation NVIDIA Quadro RTX cards to compare. Read on to see how it shapes up.