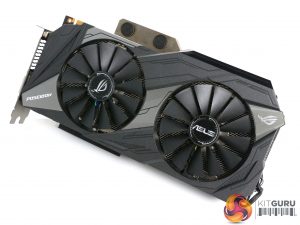 At first glance the Asus ROG Poseidon Platinum GTX 1080 Ti looks like a regular premium graphics card. It uses an open two-and-a-half slot design and has a socking great cooler with dual fans that gives you a feeling of confidence as we know that Asus can deliver a cooler that works superbly well. Indeed the cooling system on the Poseidon works in passive mode until the temperature hits 55 degrees at which point the fans start to spin into action. 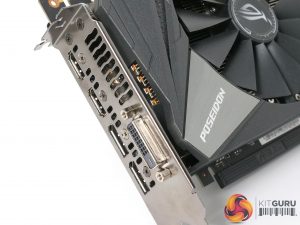 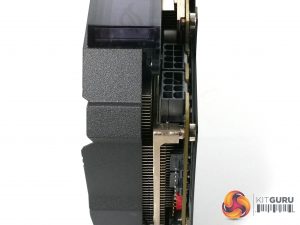 On the output bracket you will find two Display Port connectors, 2x HDMI 2.0 and 1x DVI-D, while at the opposite end of the card lies the Asus Fan Connect II feature that consists of two 4-pin fan headers. The idea is that these fans (both PWM and DC work fine) will spin in to action to cool your PC if they detect either the CPU or GPU is getting hot, depending on how you set the GPU Tweak II control software. This is very clever as it is usual for a high end gaming PC to work the CPU at relatively low levels while the graphics card is running at 100 percent. Those case fans that are typically connected to the motherboard can respond to CPU temperature but have no connection with the GPU so Asus Fan Connect II gives you the tools to deal with a potential problem. 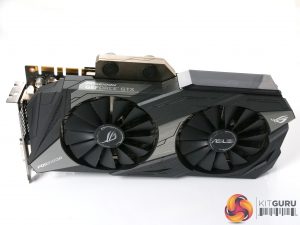 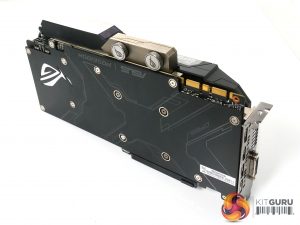 Next to the two fan headers is an RGB connector that allows you to control other lighting hardware. This seems unnecessary as we are confident that RGB aficionados will have chosen a motherboard, such as the Asus ROG Maximus IX Extreme that we used in our testing, that sports one or two RGB headers. Still, there is no harm in the inclusion of this small connector and it might come in useful.

On the top edge of the Poseidon are two 8-pin power connectors along with a terminal block for the liquid cooling connections that are the key to the headline feature of Poseidon. You can run the graphics card right out of the box in air cooled mode without paying any heed to the projecting terminal block with its two pairs of standard G1/4 threads. Alternatively you can add custom loop fittings to two of the ports, leaving the other two ports blanked off, and add the Poseidon to a custom loop, exactly as we did in our video. The key points are that you do not need to replace the stock cooler with a GPU block and that your warranty remains intact. The coolant flows through the anodised aluminium terminal block and across the copper cold plate at the heart of the system and thus removes heat from the GPU.

Regardless of your choice of cooling, when the Poseidon runs for the first time we are certain you will be blown away by the illuminated backplate and the fabulous RGB lighting on top of the graphics card that gives the appearance of an endless tunnel of light. 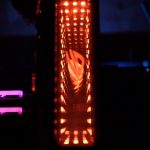 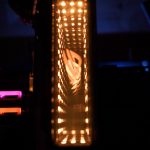