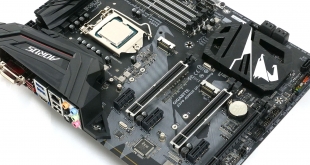 We liked the Z370 Aorus Gaming 7 enough to give it our ‘Must Have’ award, but there is no denying it is fairly expensive at £245. Move down the Gigabyte Aorus product stack past the Z370 Aorus Gaming 5 and you will come to the Z370 Aorus Ultra Gaming that is priced at a very reasonable £158, but despite that hefty saving it appears to offer the vast majority of the features you find in the Gaming 7.

In essence you only get two M.2 slots and a single Gigabit Ethernet port but pretty much everything else is the same. Apart from the VRMs which are completely different and a good deal cheaper. You won’t be surprised to learn we discuss this aspect of the motherboard at length in our video.

If you cannot see the image galleries on this page then you need to disable your ad blocker as they can interfere with our code.

You need to install the Gigabyte App Centre followed by RGB Fusion and would be advised to also install @BIOS, EasyTune and System Information Viewer. Other pieces of Gigabyte software such as Smart Keyboard, 3D OSD and Cloud Station are less important and can safely be ignored.

Once you have the software installed you can control your new motherboard within Windows and have little need to enter the UEFI set-up screen. That may not be of much interest to the enthusiast but it makes sense for the more casual gamer who doesn’t want to mess around with fan control and clocks speeds in the UEFI. The important thing is that you have the choice of full hands-on UEFI control or working within Windows.

Having said that, we don’t much like the App Centre launcher and would prefer to see a single control suite that was specific to this exact motherboard.