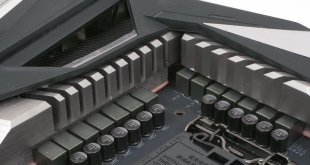 When we reviewed the Intel Core i9-9900K launch back in October 2018 we used the Gigabyte Z390 Aorus Master motherboard. We did a video review of the Z390 Aorus Master a few weeks later and now, finally we have the written pages on KitGuru that wrap up the whole thing.

There is plenty of good stuff to discuss about the Z390 Aorus Master so let’s start with the VRMs as power delivery hardware is a major focus for Gigabyte with their Z390 motherboards. Gigabyte has gone out of their way to spell out the number of power phases, the makes and models of the various chips and also their current ratings so we are crystal clear there are 12x 60A phases using a doubling scheme. Gigabyte has also worked hard on the VRM coolers, the construction of the PCB and the thermal shielding on the back of the board. You also get a great many ports and connectors and yes, you get RGB.

In fact we struggled to see any gaps in the specification as Gigabyte has pretty much thrown everything it has at the Z390 Aorus Master to such an extent we feel they may have gone too far when they installed four graphics slots. No gamer requires this feature and we would have welcomed a bit more space around the headers and connectors at the foot of this motherboard. This was the level of relatively minor detail we had to consider because when it comes to the major design choices Gigabyte has things absolutely nailed.

Note: if the above images are not displaying properly, you may need to disable your Ad Blocker as they can interfere with our display code

Previous GOG opts to end its Fair Pricing Package scheme to minimise financial losses
Next An Amazon merchant has been fined $12.8 million by the FTC for fake reviews