Whether it was the minimal increase in performance for the Haswell processors or the terrible reception that Microsoft got for shipping Windows without the Start button – the PC market has not been kind to Intel recently. The chip giant’s situation could get even worse. KitGuru considers the consequences.

Executives at Intel will want to know just how much impact the chemical explosions at Hynix will impact its stock price for 2013/14.

You can read our initial report here and our report about the world’s memory suppliers stopping shipments here.

Read back through the available literature and you will find plenty of images online that show a world where DDR4 will be introduced for PC systems soon enough – and reach up to 50% of shipped systems within 12/18 months of the move to mass production.

Intel has invested a huge amount into this market, but has been hit by various disappointments as its roadmap has slipped.

Also, its partners like Asus, MSI, Asrock and Gigabyte, all have huge development projects lined up for the move.

The question being asked now is “How much will the Hynix fires impact the delivery of Intel’s roadmap?”

Right now, it’s unclear how much of the push toward DDR4 mass production was shceduled for the FABs that caught fire.

Remember, you’re talking about some of the world’s most advanced (i.e. very small and very complicated) production being saturated by smoke particles. We have no idea how long that could take to remove completely – or if the very machines that produce the chips themselves need to be replaced. It’s not likely that this kind of technology is ‘built up, in stock and available for next day delivery’.

While exploiting the full benefit of DDR4 is likely to need new controllers (built into the processors – so possibly Haswell-E in 2014?), Intel’s momentum could well be affected by this tragedy.

Either way, Samsung shareholders must be rubbing their hands together.

KitGuru says: Many share prices across the globe will move following this explosion. The longer term impact on share prices and annual results could be huge. 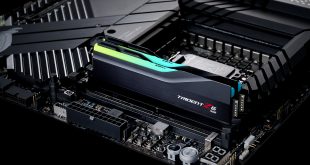