Bernd’s pretty sure why Kingston seems to be enjoying such a resurgence over the past two years, “Our design appeals. We have tightened up our marketing communication to make it easy for customers to match our products with their needs, we deliver rock solid products at competitive prices through a well establish reseller channel which gives us unrivalled reach unlike some of our niche-competitors”.

KitGuru hits a wide audience, over a million people a month actually, but while we sit in bed at night dreaming that we’re reaching a hugely diverse audience, the reality is that most of our readers have a very strong technical understanding of the products we report on.

Kingston’s sustained R&D drive on its performance memory brand, HyperX, has resulted in some interesting world firsts, as Bernd explains “We’ve recently released 2400Mhz dual channel and 2333Mhz SKU’s to support the extreme market. When you start pushing the performance of technology, it’s not just the memory but all the components used in the system, including the CPU, the motherboard and BIOS that need to be tuned to squeeze every megahertz out of a system. And at these speeds, the list of PC components that can get to this level is narrow. In my opinion, to build a stable system that runs 24/7, you need to have a lot of technical expertise. For a few minutes, you can push some kits to over 2600Mhz, and sometimes even higher if using cooling techniques. For production products that will run 24 hours, seven days a week, requires high quality components and testing.  Kingston Technology is the industry’s current leader with the 2400Mhz and 2333Mhz triple channel kits, XMP certified and posted on Intel’s XMP website”.

Most of the KitGuru audience has access to a decent Digital SLR camera. Lord knows, all of us have had that great moment when we want to snap a series of money shots and found that the media installed just can’t keep up with the task. We asked Bernd about the existing Class 10 specification and what Kingston sees on the horizon.

Then he compared the usage model differences between video capture and still shot demands – which actually present a paradox, “SDXC is the next step for SD cards whilst CompactFlash cards are soon to see the release of a new version called CFast.  Both of these new formats aim to provide not only increased speed to support the needs of rapid fire fast DSLRs, but also very high capacities to cater for high pixel count file sizes.  Class 10 speeds refer to the sustained minimum transfer rate  – demanded by high quality HD video capture devices for instance – whilst we see professional DSLR users demanding high burst rate speeds.  This is evident in our SDXC U1 Class 10 card which has a burst speed of up to 35 MB/sec”. KitGuru’s perspective?  If you’re going to spend almost £300 on a memory module, you better have a serious camera. 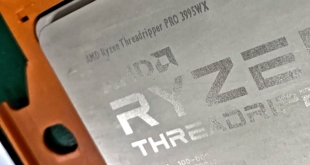 Ryzen Threadripper PRO series processors appear to be on the way...