G.Skill has been a front runner in high-performance RAM for a good while now. We've seen the company push DDR4 speeds to their limits and now, the company is turning its attention to delivering higher capacities, with new 64GB and 128GB DDR4 RAM kits heading our way.

The 64GB kit manages to hit speeds of 4266MHz, with eight 8GB modules in total. Meanwhile, the 128GB kit includes eight 16GB modules running at 4000MHz. These are incredibly high speeds, particularly when you consider the number of modules and the capacity involved. Each kit uses Samsung B-die ICs, which are renowned for their reliability and frequency potential. Each kit is also validated using the ASUS PRIME X299-Deluxe II motherboard, alongside an Intel Core i9-9920X and Core i7-9800X processor respectively. 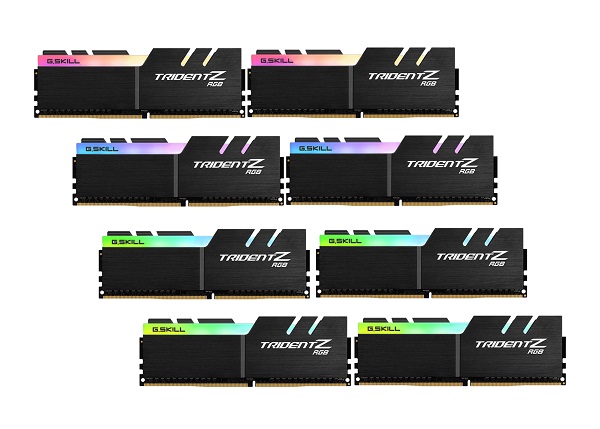 Both memory kits support Intel XMP 2.0. We don't have availability or pricing just yet, but we are expecting both of these memory kits to start shipping in Q1 2019.

KitGuru Says: These memory kits are made with HEDT computing in mind, so you'll need an X299 motherboard to take full advantage. Still, its nice to see some high-performance, high-capacity DDR4 kits hit the market, especially at 4GHz+ speeds. Are any of you thinking about a RAM upgrade any time soon? What kit are you currently using?