The array of mainboard options facing enthusiasts toward the back end of 2014 is nothing short of astonishing. With four mainstream manufacturers vying for position and several chipsets available, everyone is looking for any advantage they can get. KitGuru spies the latest step forward in this competition.

For the most part we all focus on the power of CPUs and graphic cards but, in the 21st century, the connection speed between disparate devices is as important as any other. Networks are a 21st century issue. Pure transmission speed is one thing, latency is another.

When the Bigfoot boffins first decided to work around the Windows networking stack in 2006, the idea was quite revolutionary. Look at all the places where Microsoft's way of working with networks might decrease speed or increase latency – and simply create another solution that can bypass those bottlenecks. The result was the original Killer networking card, which was a decent enough product – but hampered by its pricing.

There then followed a five year journey, during which time the company bounced between potential acquisition and complete failure.

In September 2011, something strange happened.

Qualcomm, a $25 Billion corporation, declared complete confidence in the concept and IP – buying it for itself. So now what had been considered a marginal technology by many, was suddenly part of the portfolio of a very serious and well financed organisation.

We spoke to the MSI mainboard team while we were over in Taipei this week for the Beat IT 2014 gaming event, and they told us that putting Killer networking into their premium gaming X99 board was an easy decision.

According to the packaging, the benefits centre on an ability to utilise the Killer DoubleShot Pro facility – allowing LAN and WAN to function simultaneously with a combined data speed up to 1.866Gbps.

Probably useful for gamers that want to take advantage of the in-built full HD hardware streaming solution for game broadcasting at 60fps with zero CPU impact. 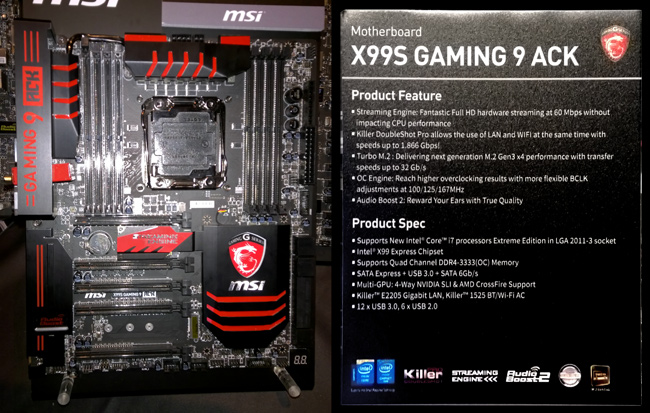 KitGuru says: Whatever your views on Killer network products, it does make for an interesting tick-box next to a top end mainboard. If it floats your boat, then the ‘K' is what you're looking for after the ‘AC'.

How important is networking speed to you?  Let us know over on Facebook.