Asustek Computer has announced a new mainboard that weds extreme durability and reliability with moderate cost. The new TUF Trooper B85 features complete protection against lightning strikes and electrostatic discharge (ESD) as well as uses “military grade” components that will last longer than standard ones. The platform supports virtually all modern microprocessors, but will does not feature overclocking capabilities or rich upgrade options. 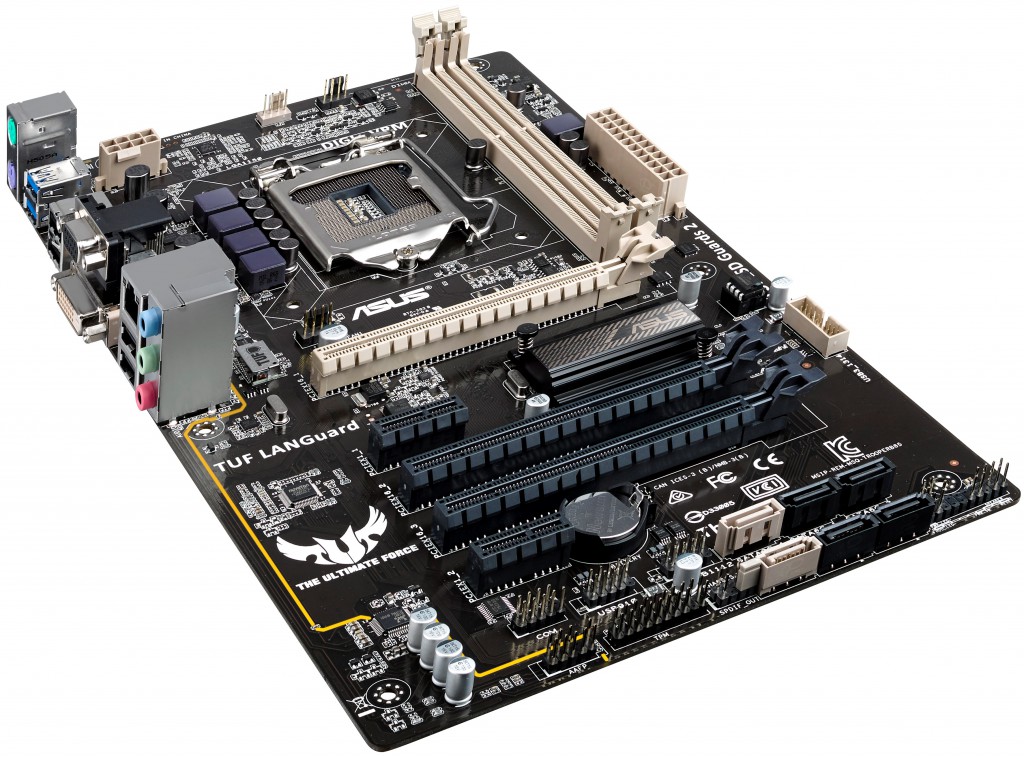 Like all Asus TUF-series motherboards, the Trooper B85 is built with military-certified components, such as Japanese-made 10K black metallic capacitors (with enhanced temperature endurance ang longer lifespan), TUF MOSFETs and TUF’s chokes that are manufactured using high-grade anti-oxidization materials.

Just like more expensive members of the Asus TUF family, the Trooper B85 features TUF LANGuard technlology that protects the Ethernet port against lightning strikes and electrostatic discharge; ESD Guards that protect all of the rear IO ports against inadvertent electrostatic discharges when connectors are inserted; shielded audio circuits as well as USB over-voltage protection. In addition, the motherboard features the TUF Thermal Radar Core which monitors cooling fans and allows to control them. 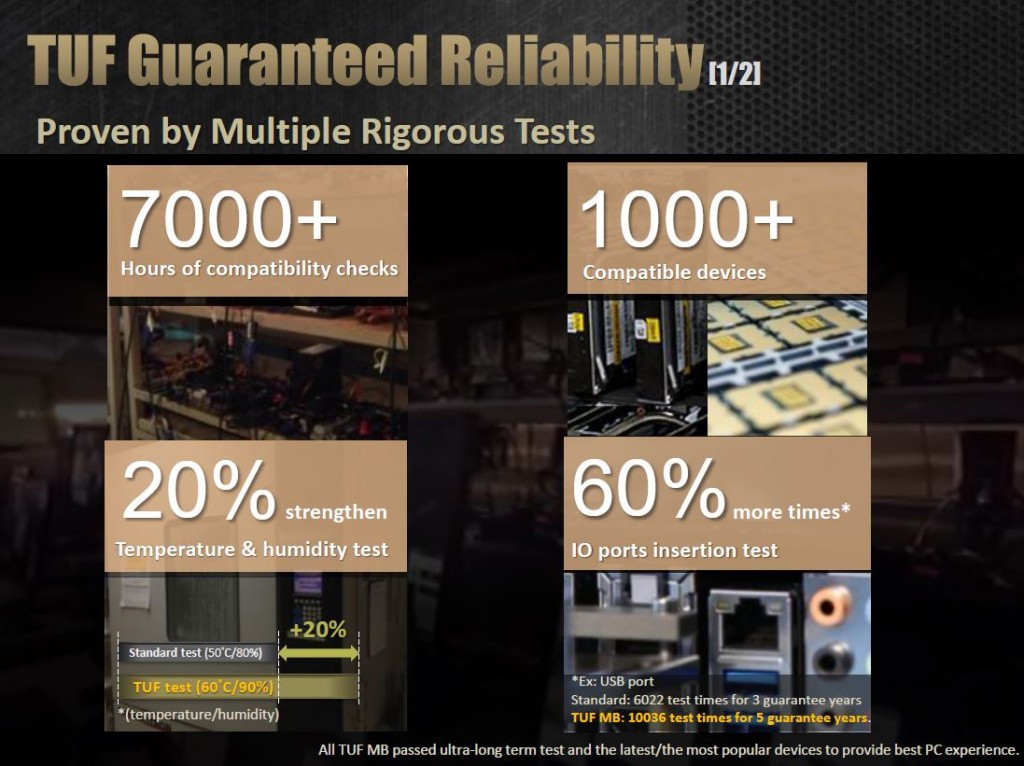 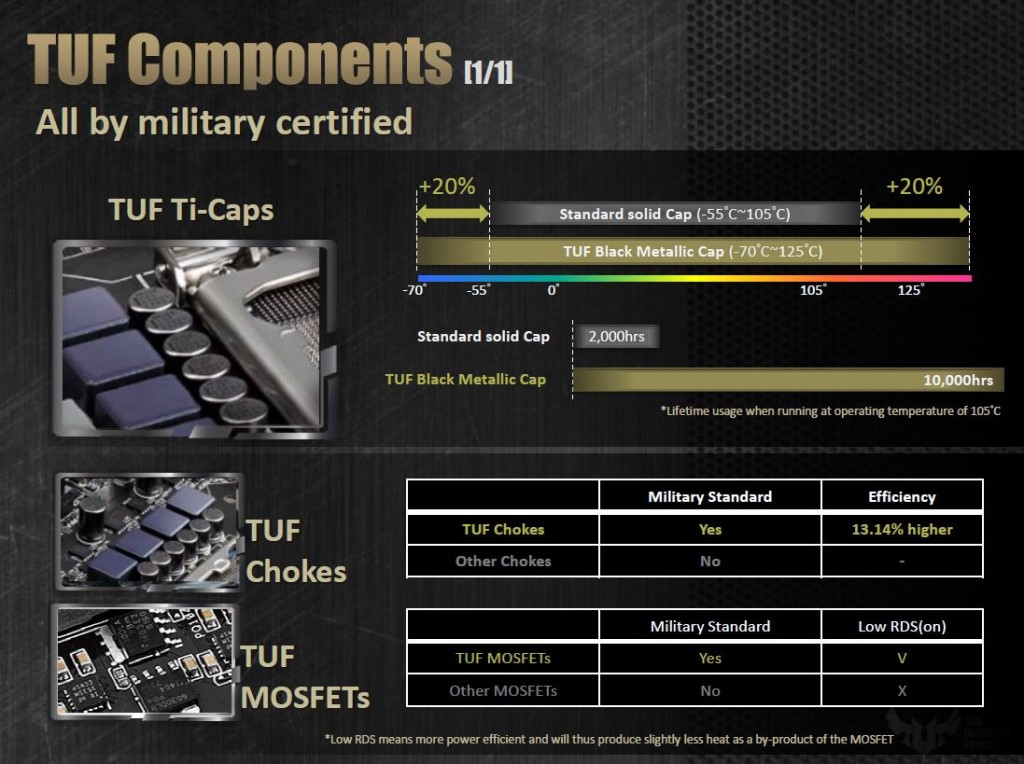 Every TUF Trooper B85 motherboard undergoes punishing burn-in tests, with temperatures of up to 55°C for 48 hours and at humidity levels as high as 90%. Every motherboard is also subjected to a 20-hour extreme-temperature test of up to 60°C at 90% humidity, as well as undergoing rigorous thermal-shock tests. 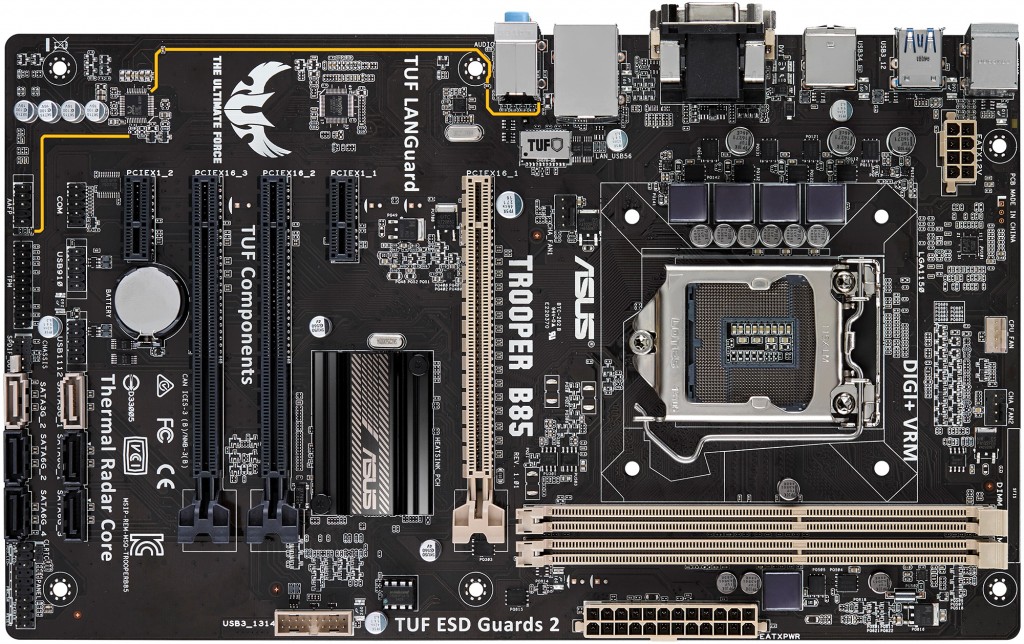 The TUF Trooper B85 mainboard is covered by a five-year warranty. Prices will vary depending on the region. While the Asus TUF Trooper B85 will be considerably more expensive than any other Intel B85-based motherboard, it will be more affordable than similar high-reliability motherboards from the company that are designed for enthusiasts and overclockers.

KitGuru Says: If you are in the market for a mainboard with enhanced reliability and do not want to buy server-grade hardware from Asustek, Supermicro or Tyan, then the TUF Trooper B85 is a thing to consider. It features all the advantages that consumer-class hardware has, such as quality integrated audio and compatibility with various hardware, but features components with improved reliability as well as a long warranty. Unfortunately, with the TUF Trooper B85 you will have to forget about overclocking, upgrades of memory or SSDs as well as many other things that enthusiast-class platforms support.