Asus: our future mainboards will be 100% SATA Express-compliant

Although Intel Corp. decided not to bring support for next-generation solid-state drives with Serial ATA Express (SATAe) interface this year, Asustek Computer earlier this year demonstrated motherboards with SATA Express connectors and vowed to bring the new interface to the market. On Wednesday the company said that it can now assure that its future mainboards will be 100% compatible with future SSDs.

The SATA Express is the next-generation interface for storage devices that is based on PCI Express 2.0 (5GT/s) or PCI Express 3.0 (8GT/s) protocols and which can increase maximum bandwidth to 1GB/s (PCIe 2.0) or 2GB/s (in case of PCIe 3.0). While it is possible to add support for SATA Express with the help of a special controller, it is still extremely important to know that not every motherboard is made the same: having the physical connector is only a small part of the equation. In order to deliver the full potential of SATA Express, the host mainboard must support the separate reference clock with independent spread spectrum clocking architecture (SRIS) technology. Obviously, the SSDs connected to the host should also feature the tech.

Since SATA Express uses PCI Express logical protocol and SATA connectors, there is a number of requirements for SATA Express devices to work correctly since PCIe was developed for connecting devices over short distances on mainboards.

For PCI Express-based applications the same reference clock (usually with spread spectrum clocking, a.k.a. SSC) needs to be delivered to both ends of the link. For in-box apps this is not a problem since the PCIe edge connector already has pins to carry this reference clock. However, for long-distance cases that necessitate using a cable, the requirement that the reference clock (Refclk) needs to be sent in addition to the data signals is troublesome. While sending the reference clock using a special link within a cable does not seem hard, it creates two issues: the cables and connectors need to be thicker, heavier, larger and more expensive to carry the extra clock signals; even though the reference clock does have SSC on it there can still be a large amount of electromagnetic interference (EMI) resulting from sending it. Moreover, since SATA Express uses SATA connectors it may be simply impossible to implement a link with Refclk.

In a bit to avoid such troubles, the PCI SIG developed SRIS technology to define a usage model with separate reference clocks at each end of a link. Thus, the root complex Refclk does not need to be sent across the cable in a PCIe SRIS application. The SRIS has to be supported by the BIOS of the host mainboard, which is exactly what Asustek plans to implement. 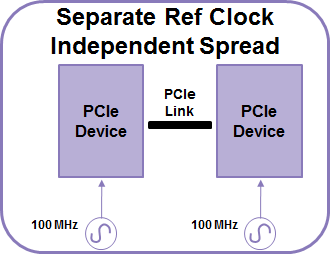 According to Asus, SATA Express-capable mainboards that lack the SRIS architecture in the BIOS could present compatibility problems: storage might not be recognized, might not work correctly, or function with limited performance. While the SRIS technology is a part of the PCI Express 3.0 standard, since it is not needed for add-in-cards, it may not be supported by modern mainboards.

The SRIS BIOS technology will be implemented in future Asus motherboards, the company said. As a result, all SATA Express-enabled platforms by Asus will support the future SSDs.

KitGuru Says: It is nice to see that Asustek is ready for solid-state drives featuring SATA Express interface although there are no such SSDs yet. However, there are three important things that have to be said about the current SATA Express employments. Firstly, Asustek’s (and probably other makers’ as well) implementation of SATAe is based on PCI Express 2.0 x2 interface that is supported by Intel 8-series and 8-series chipsets, hence its peak bandwidth is 1GB/s or less. While it should be possible to use processor’s PCI Express 3.0 interconnection, the implementation could slowdown graphics cards that use CPU’s PCIe. Moreover, the first-generation SATA Express controllers for SSDs may only support PCIe 2.0 since they will be intended for platforms based on chipsets that only support PCIe 2.0. Secondly, even SATAe implementation based on PCIe 2.0 has to be validated by industry groups and SSD makers, so any surprises from the current-gen SATAe platforms may be expected. Thirdly, SATAe based on PCI Express 3.0 protocol (and this is when SATAe will become a true alternative for PCI Express slots) will only emerge when chipsets start to support the technology. At present it is expected that core-logic sets for Intel Skylake processors will support PCIe 3.0 protocols. All-in-all, the SATAe will get truly important not today, not tomorrow, but the day after tomorrow.

Previous Windows 8.2 may be due this Fall, Windows 9, Windows 10 are en route
Next Government gives thumbs up to Oculus, Facebook deal