The latest 500-series chipsets from Intel are here, and that means a ton of new motherboards. MSI has entered the fray by announcing no less than thirty motherboards across the Z590, B560 and H510 chipsets.

For its 500-series motherboard, MSI is doubling down on the four product ranges we have come to know over the years – MEG, MPG, MAG and Pro. In total, the company has announced fifteen Z590 boards, twelve B560 boards and three H510 boards. Full details will become available during MSI's keynote on Thursday, but for now the company has shared some initial information.

In general terms, all MSI 500-series motherboards support PCIe 4.0, with up to 64GB/s bandwidth. MSI's Z590 boards will also come equipped with WiFi 6E and its 6GHz band. The company's Z590 Gaming series are also seeing upgraded Audio Boost 5 codecs, which MSI says can ‘create a synergy effect which can amplify sound and have better gaming experience.' The company's Dragon Center software has also been updated with a new UI and integrated functionality like overclocking and RGB control.

As for its MEG series, MSI says these boards are best described as ‘exquisite and gorgeous', and outlines a number of new features, including aluminium backplates on both the MEG Z590 Godlike and MEG Z590 ACE, designed to provide greater surface area for heat dissipation. The Godlike also offers a new ‘Frozr heatsink' design as well as a stacked fin array. 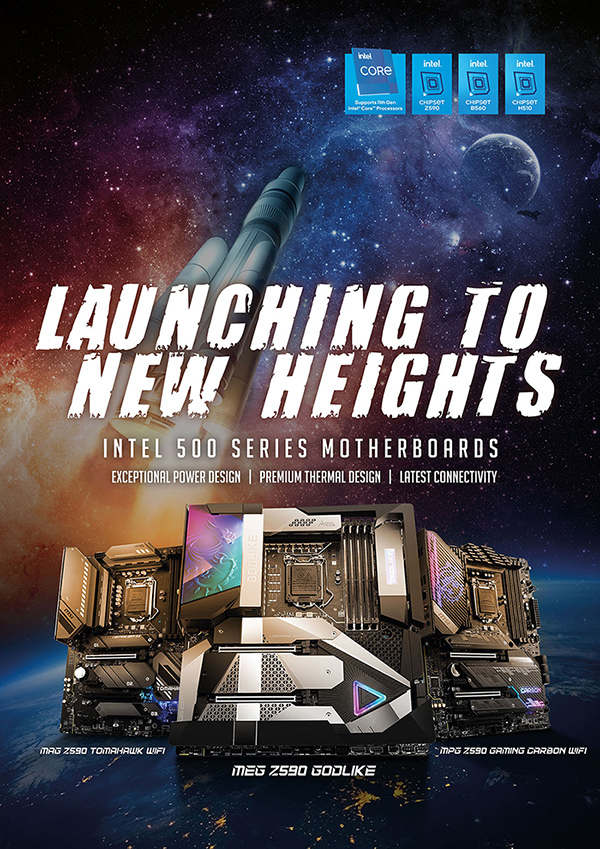 The we come to the MPG boards, here MSI highlights the use of its M.2 Shield Frozr (M.2 heatsinks) and K7 thermal pads, designed to offer optimal SSD performance. MSI's MAG range, including the popular Tomahawk boards, have been refreshed with ‘new colour matching', while the Tomahawk boards offer graphite heatsinks. Lastly, the PRO series are designed ‘for common use' and offer a new Frozr AI Cooling technology ‘which will detect CPU and GPU temperatures and automatically adjust system fan duty to a proper value'.

Here is the full breakdown of MSI's latest 500-series boards:

MSI says its 500-series boards will be available on January 27.

KitGuru says: That's a lot of motherboards… which takes your fancy?