Asus is set to launch a new Z97 motherboard in Europe, the Z97-Pro Gamer, built with all of the gaming necessities at a fairly affordable price point. The motherboard will come with a handful of ROG series features such as the Asus Sonic Radar II overlay and Supreme FX audio. It is also red and black, keeping with the normal Republic of Gamers theme.

Obviously this motherboard uses the Z97 chipset, giving it support for for all Haswell and Haswell refresh CPUs in addition to the upcoming Broadwell architecture, although further details on Broadwell have yet to be announced. CPU power delivery is handled by the Asus Digi+ VRM circuitry. 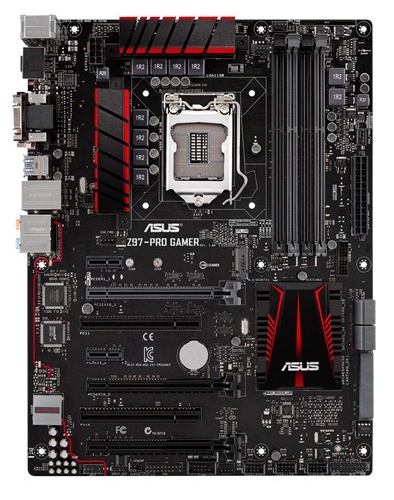 There are several PCI-Express slots for graphics cards, two legacy PCI slots and two PCI-Express x1 slots. On the board you'll find a SATA-Express interface and an M.2 SSD interface. In all, its a premium looking motherboard with all of the necessary features for a high end gaming system. It will be releasing in Europe for €135, although we don't know exactly when the board will become available, nor do we have a UK price. However, €135 does convert to around £105.

The Asus Z97-Pro Gamer motherboard currently won't be launching in the US.

KitGuru Says: Asus tend to release motherboards to hit a wide range of price points. Sitting around the £100 price tag, it's safe to say that the Z97-Pro Gamer will be competing with other mid-range motherboards. What do you guys think of the upcoming motherboard?