The big day has arrived – Intel has officially launched its 12th Gen “Alder Lake” desktop processors and the Z690 chipset. ASUS is already well prepared for this generational leap, with a full stack of Z690 motherboards ready to go, with ROG Maximus leading the way. 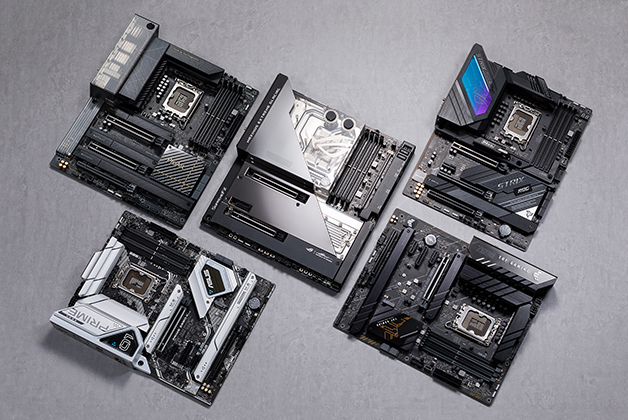 The ASUS ROG series continues to be the flagship. At the top of the stack we have the ROG Maximus Z690 Extreme, bringing DDR5 memory support, 24+1 power stages, MicroFine alloy chokes and premium-grade capacitors cooled by a massive cold-forged heatsink. With all of that in place, this motherboard is poised to be an overclockers dream, with all the tools needed for extreme and basic performance tuning, including AI Overclocking, AI Cooling, OptiMem III and Fan Xpert 4.

As usual, the ROG Maximus board aims to offer the pinnacle in performance and features. With that in mind, you get a ton of connectivity options, including onboard WiFi 6E, 10Gb and 2.5Gb Ethernet, PCIe 5.0 M.2 slots, USB 3.2 Gen 2×2 front panel connector with Thunderbolt 4 support and several USB Type-C connectors on the rear I/O panel.

If you're looking to go all-in on a custom water cooling loop, then you may want to opt for the ROG Maximus Z690 Extreme Glacial, which includes all the same specs and features, but ups the ante with an EK monoblock, making the motherboard ready to hook up to a liquid cooling loop. The design has a bit more pop too thanks to the ROG AniMe Matrix LED display, which can be customised to show personalised text, animations, system information or other effects.

The ROG Maximus Apex, Formula and Hero motherboards also make a return with the Z690 chipset. The Apex board is a streamlined motherboard designed for overclockers – it even supports liquid-nitrogen cooling for extreme overclocks. Interestingly, the Apex board cuts the number of memory DIMM slots to two, enabling higher signal integrity for DDR5 memory and paving the way for speeds as high as 6600MHz. The Apex also uniquely features ASUS Auto-Extreme technology, a manufacturing technique where all soldering is completed on a single pass. This is intended to deliver better overclocking stability, cooling performance, power efficiency and product longevity, plus larger voltage thresholds.

The ROG Maximus Z690 Formula comes in a Moonlight White colorway, setting it apart from the rest of the line-up. This particular board comes with liquid-cooling support built in thanks to the CrossChill EK III heatsink, designed in collaboration with EK. The heatsink includes inlets and outlets so you can cool the VRMs through your custom liquid cooling loop. Other features include 20+1 power stages rated for up to 105 amps, SupremeFX ALC4082 sound chip with an ESS ES9018Q2C DAC and Two-Way AI Noise Cancelation for next-level gaming audio and three onboard M.2 slots so you'll have plenty of room for ultra-fast storage. The Formula doesn’t skimp on connectivity either, with onboard WiFi 6E, 10 Gb Ethernet, a USB 3.2 Gen 2×2 front-panel connector, dual Thunderbolt 4 ports on the rear I/O panel, and of course full support for PCIe 5.0 video cards and DDR5 memory modules

The ROG Maximus Z690 Hero is the entry point to the Maximus line, sporting a 20+1 power stage design rated for up to 90 amps. Like the other Maximus Z690 motherboards, the Hero includes onboard WiFi 6E plus 2.5 Gb Ethernet, three onboard M.2 slots with two more available via the bundled ROG Hyper M.2 card, an ESS 9018Q2C DAC for high-fidelity audio, Thunderbolt 4, USB Type-C, and the PCIe Slot Q-Release button. The biggest eye-catcher here though is the Polymo LED display across the I/O cover – a microstructural array of LEDs paving the way for intricate RGB lighting effects.

ROG Strix Z690-E Gaming WiFi is at the top of this range, delivering 18+1 power stages, 8+8 ProCool II power connectors, high-end alloy chokes and rugged capacitors. These elements are cooled by two aluminum heatsinks covering the rear I/O and VRMs, and they are connected by an L-shaped heatpipe to further improve thermal performance. The PCIe 5.0 M.2 slot also gets its own heatpipe for additional SSD cooling. The two remaining M.2 SSD slots get backplates in addition to pre-installed heatsinks, which you can place on top of any NVMe SSD.

The ROG Strix Z690-E Gaming WiFi comes with WiFi 6E, Intel 2.5 Gb Ethernet, HDMI 2.1 and USB 3.2 Gen 2×2 Type-C to cover all your connectivity needs. Despite not being part of the Maximus line, this motherboard also includes all of the AI Overclocking, cooling and networking tools that ship on the higher-end Asus boards.

It is also worth noting that the Z690-A Gaming WiFi D4 is one of the few motherboards in this line-up to sport DDR4 DIMM slots exclusively, making this a great option for those looking to save some money on their upgrade by sticking to DDR4 memory over newer, more expensive DDR5 memory kits.

Finally, Mini-ITX PC builders are not being left behind. For super compact gaming systems, you'll want to keep an eye out for the ROG Strix Z690-I Gaming WiFi, packing many of the premium specs found on the larger ATX models, packed into a much smaller footprint. Some of those premium features include DDR5 memory support and 10+1 power stages, ProCool II power connectors, high-end alloy chokes and rugged capacitors – performance tuning also gets a boost from the bundled AI Overclocking and AI Cooling software.

You get plenty of connectivity options with this tiny board too, including WiFi 6E, Intel 2.5 Gb Ethernet, and two Thunderbolt 4 USB Type-C ports that can drive two external 4K displays, HDMI 2.1 and five USB 3.2 Type-A ports.

All ASUS ROG Z690 motherboards will be available alongside Intel's new 12th Gen Core Alder Lake processors, which you can learn more about, HERE.

KitGuru Says: As usual, Asus has an impressive array of motherboards ready to go. Are any of you thinking about upgrading to Alder Lake? Will you be picking up an ASUS ROG motherboard to pair with the new processor?