Yesterday was a big one for both AMD and its partners. Not only have the first 3rd Gen Threadripper CPUs been announced, but motherboard makers are starting to show off their first offerings for the new TRX40 platform. We've seen a trio of boards from ASUS already this week and now, our attention turns towards MSI, with three new TRX40 motherboards of its own.

MSI's TRX40 motherboards focus on professionals and creators, with the Creator TRX40, TRX40 PRO 10G and TRX40 PRO WIFI models. The flagship of the three here is the Creator TRX40, which MSI claims has the “best hardware design for maximum performance and long-lasting operation”.

The MSI Creator TRX40 comes with a new thermal solution, with a larger VRM heatsink, extended heatpipe and stacked fin array to maximise heat dissipation. A Frozr heatsink and fan is used for chipset cooling, there is also shielding for the on-board audio hardware and a double-sided M.2 Shield to keep your SSD temperatures under control for peak performance. 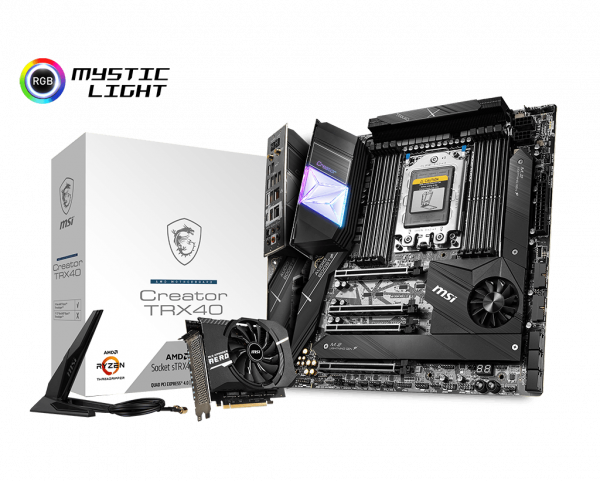 MSI's PCIe 4.0 lanes carry a data transfer bandwidth of 64GB/s, ensuring plenty of support for PCIe 4.0 SSDs. The PCIe slots on the motherboard are also reinforced with extra solder points to withstand heavier GPUs and shielding to prevent any signal interference. An M.2 XPANDER-AERO add-in card will also give you room to plug four M.2 SSDs in on a single card with transfer speeds up to 64Gb/s.

Finally, for I/O and connectivity, the Creator TRX40 packs 19 USB ports and for network connectivity, you get dual LAN ports, including a 10G Super LAN connection for high-bandwidth and lower latency. The board also comes with Wi-Fi 6 on-board for future-proofed wireless connectivity.

The TRX40 PRO 10G and TRX40 PRO WIFi are similar boards. You still get the M.2 XPANDER card for additional SSDs, and MSI's new motherboard cooling solution to keep everything working optimally. However, the power design is a 12+3 phase design instead. Other differences are fairly obvious, with the PRO 10G offering 10G LAN and the PRO WIFI offering on-board Wi-Fi 6 connectivity.

Pricing is still to be confirmed but all three MSI TRX40 motherboards should be available in the UK later this month to coincide with the TR 3960X and TR 3970X retail release.

KitGuru Says: What do you all think of the TRX40 motherboard offerings so far? MSI's Creator board looks to be packed with high-end features, but we'll have to wait and see how pricing ends up looking.