We have two huge CPU launches on the horizon at the moment, with both Intel and AMD debuting new desktop processors in the new year. As you might imagine, this is also quite a big occasion for motherboard makers, who will get the chance to refresh their lineups with new and improved designs for the Z270 and X370 chipsets. It looks like MSI doesn't want to keep quiet for much longer though, as the company has begun teasing by giving us a sneak peek at a new upcoming feature for its next-gen motherboards.

M.2 SSDs have been supported on motherboards for quite some time but they rarely benefit from any form of active cooling. To help with this, MSI will be implementing the M.2 shield on future motherboards, which uses a ‘heat shield' and a thermal pad to help keep M.2 solutions at lower temperatures, which can help with longevity and stop throttling. 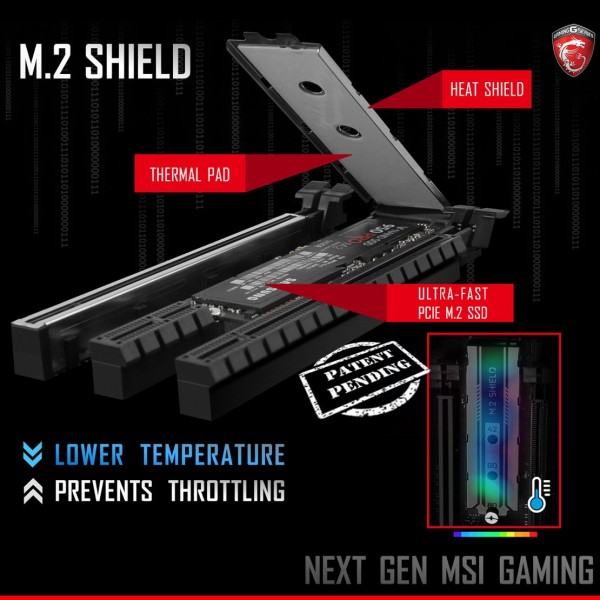 This seems to come after reports from earlier this year, which showed that Samsung's very popular M.2 950 Pro SSD was overheating and suffering from performance throttling in some cases. This issue was later addressed with the M.2 960 Pro from Samsung but this should be even less of an issue with some cooling in place.

We don't know exactly which motherboard this feature will first appear on but it is safe to assume that it will land with the next batch of motherboards, arriving at the launches of Intel Kaby Lake and possibly AMD's Zen processor as well.

KitGuru Says: It's not the biggest announcement in the world but given how hot high-powered gaming PCs can get at times, it is always nice to have additional cooling for components. After all, nobody wants their M.2 drive suddenly failing or throttling due to heat.