There has been so much talk about Ryzen lately that it might be easy to forget that Intel's Kaby Lake processors are still relatively new. With that in mind, there are still new motherboards coming out for the Z270 platform and this week, we have one from ASUS- the ROG Maximus IX Extreme, complete with integrated water cooler, Aura Sync illumination, exceptional audio and more.

The key standout for the Maximus IX Extreme is the integrated ROG monoblock, which provides water cooling for the CPU alongside a liquid-conduction cooled M.2 heatsink. This monoblock is designed to cool both the CPU and VRM and comes with an embedded flow meter which monitors the water pump in real time. Obviously, you will also need a radiator for a custom water loop, so this motherboard has eight radiator fan headers. 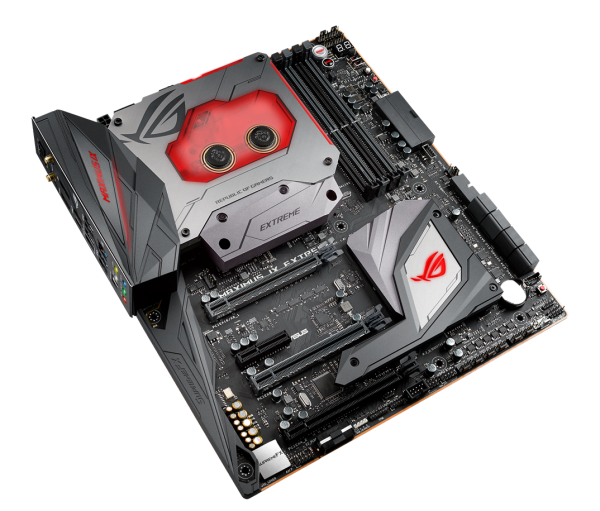 Being a Z270 motherboard, the Maximus IX Extreme has support for Intel's latest Kaby Lake processors but it also supports DDR4 RAM speeds of up to 4133MHz. On the connectivity side, the Maximus IX features the latest Intel Ethernet port, along with dual PCIe 3.0 x4 M.2 slots for NVMe SSD RAID. There is support for USB Type-C and USB 3.1 as well as Thunderbolt 3 with transfers of up to 40Gbps.

If you require good onboard audio without a separate soundcard, then this board uses the ROG-exclusive SupremeFX S1220 codec with support for Sonic Studio III and Sonic Radar III. This onboard solution delivers a 113dB signal to noise ratio on the line-in connection and can record up to 120dB on the line-out. This codec is paired with an ESS Sabre HiFi ES9023P DAC for the front panel.

As a flagship motherboard, the ROG Maximus IX Extreme does not come cheap with a suggested retail price of £619.99. If you happen to have that kind of cash, you should be able to pick one of these up at retail in mid-March.

KitGuru Says: I've always like the Asus ROG motherboards, though I don't think I could ever bring myself to spend this kind of cash on one. That said, there are plenty of PC builders out there with very deep pockets so I'm sure there is an audience for this somewhere. What is the most you've ever spend on a motherboard?