Microsoft is now sneaking ads into the Windows 10 file explorer

Microsoft has made some questionable decisions over the course of Windows 10's lifespan but for many, this might be a step too far. Microsoft has already been experimenting with advertising on Windows 10, with some appearing on Cortana and the Start menu but now, Microsoft seems to be sneaking advertisements into the File Explorer too.

Over on the Windows 10 subreddit, one user came across what appears to be two adverts in File Explorer, one for Microsoft's own OneDrive cloud storage service and another for what appears to be Bejeweled but that's a guess on my part. You can see the image below: 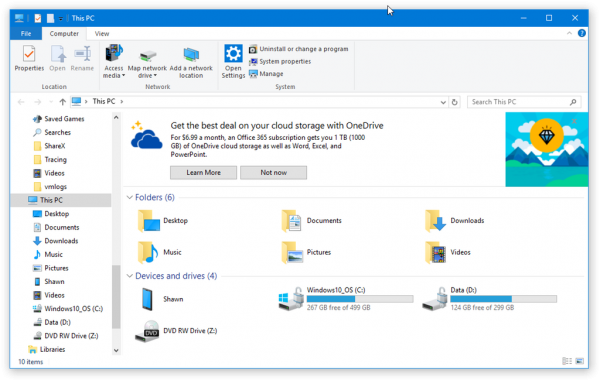 According to Microsoft, this new OneDrive notification within the File Explorer is considered to be a ‘tip', which can be turned off or dismissed if you choose. It seems to be tied into Windows 10's notification system.

Aside from the obvious intrusion issues, this practise could also be considered somewhat anti-competitive, with Microsoft turning its OS into a way of pushing its own services without presenting any alternatives. Google is actually facing trouble with the EU Commission for similar practises with Android and pre-installed Google applications.

KitGuru Says: If Microsoft continues to be this pushy with ads within Windows 10, I imagine more than a few will be so turned off that they revert back to Windows 7. I can see absolutely no good reason for there to be adverts within the File Explorer, that's just taking this whole thing too far.