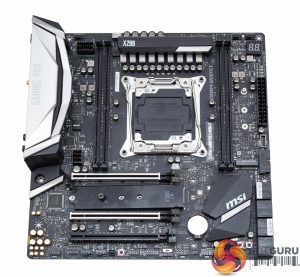 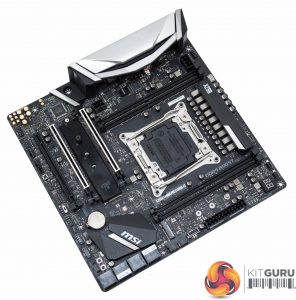 MSI’s “Carbon” motherboards are neutral with generous use of colours such as black, grey and silver. Gone are the gaudy blues, reds and yellows of previous generation products with MSI leaving the colour choices up to the users through the RGB Mystic Light functionality. The MSI X299M Gaming Pro Carbon AC is by all accounts a well presented and stylish addition to any system. 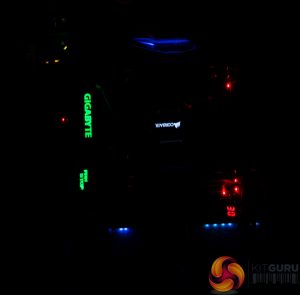 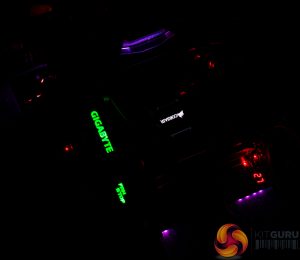 There are four RGB lighting zones:

The onboard LEDs are abundantly customisable and splitting each section up into discrete LED zones gives the end-user more creative freedom. There is an additional non-RGB lighting zone near the VRM heatsink dubbed “MB Function LED” but it’s a red light that can do little more than flash. 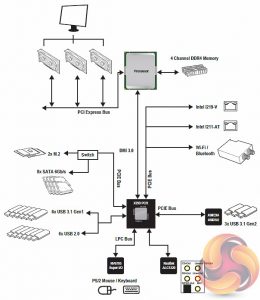 The limited size footprint of micro-ATX means no surprises with connectivity or complex bandwidth negotiations. The only bandwidth sharing to contend with is when using M.2 slots in SATA mode, this disables two corresponding SATA ports. Other than that it’s full steam ahead and 28-lane CPUs only suffer to the extent that PCIe bandwidth is 16X/8X/4X with all slots populated, 44-lane CPUs are able to achieve 16X/16X/8X.

MSI provides a front panel USB 3.1 header in addition to USB 2.0 and 3.0 for ample USB options. Debug and overclocking tools are provided in the form of debug LEDs, a code reader, dual BIOS switch and power and reset buttons.

One of two M.2 slots is located here alongside the right side memory lanes (up to 80mm), the second M.2 slot sits beneath the M.2 shield between the two PCIe lanes (up to 110mm). 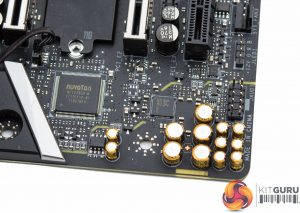 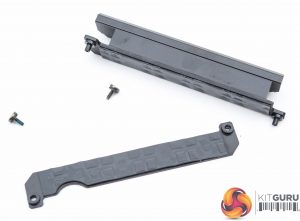 The CPU socket draws power from a single 8 pin EPS connector tied to MSI’s claimed 10 phase power delivery solution. The heatsink responsible for cooling said power delivery components makes contact on the top and underside of the motherboard but is still relatively compact.

We witnessed VRM temperatures in the low 80 degrees Celsius region (room temperature 21 degrees Celsius) when monitoring MSI’s own dedicated “MOS” temperature sensor readout during a 10 minute overclocked loading session (4.6GHz @ 1.2 volts vCore). This is toasty but still under control though good airflow in any case is a must as it should be noted we test on an open-air test bench for motherboard reviews.

It is likely that higher core count CPUs like the 18-core i9-7980XE would place additional strain upon this VRM solution and may need more significant cooling capabilities.

MSI’s VRM is powered by an International Rectifier IR35201 digital PWM controller with Nikos PK632BA and Nikos PK616BA MOSFETs. There are 9 pairs of these MOSFETs on the top each with its own Choke. Underneath is another 8 pairs of PK616BA and PK632BA MOSFETs as well as four IR3598 dual MOSFET drivers.

The CPU VRM configuration appears to be the IR35201 in a 4+1 configuration with four phases doubled to eight using the IR3598 doublers for the CPU VCore/Input Voltage, plus one more phase for the VCCSA. Near the PCIe lanes another PWM controller, IR35204, is present which probably drives the VCCIO for the total of ten phases marketed by MSI (8+1+1). 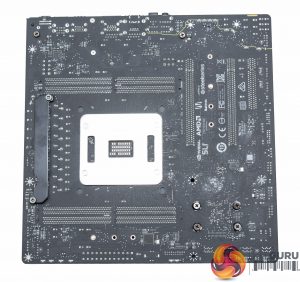 MSI uses cross-head screws throughout for easy maintenance and watercooling configuration. As already mentioned there’s a thermal plate underneath to provide more cooling to the underside VRMs that form part of the overall CPU VRM package.