Kingston Technology has introduced its first high-performance solid-state drive for consumers that comes with PCI Express 2.0 x4/M.2 interface. The new HyperX Predator SSDs are designed for performance enthusiasts, but thanks to massive simplicity of its construction, it is possible to expect that the product will not be too expensive.

The Kingston HyperX Predator PCIe SSDs will be available in 240GB, 480GB and 960GB capacities. The drives are based on the Marvell 88SS9293 controller and unknown type of NAND flash memory. The manufacturer declares speeds up to 1400MB/s read and 1000MB/s write for its product, but does not specify any details regarding IOPS performance. The drive is bootable via standard AHCI drivers, which is very convenient. 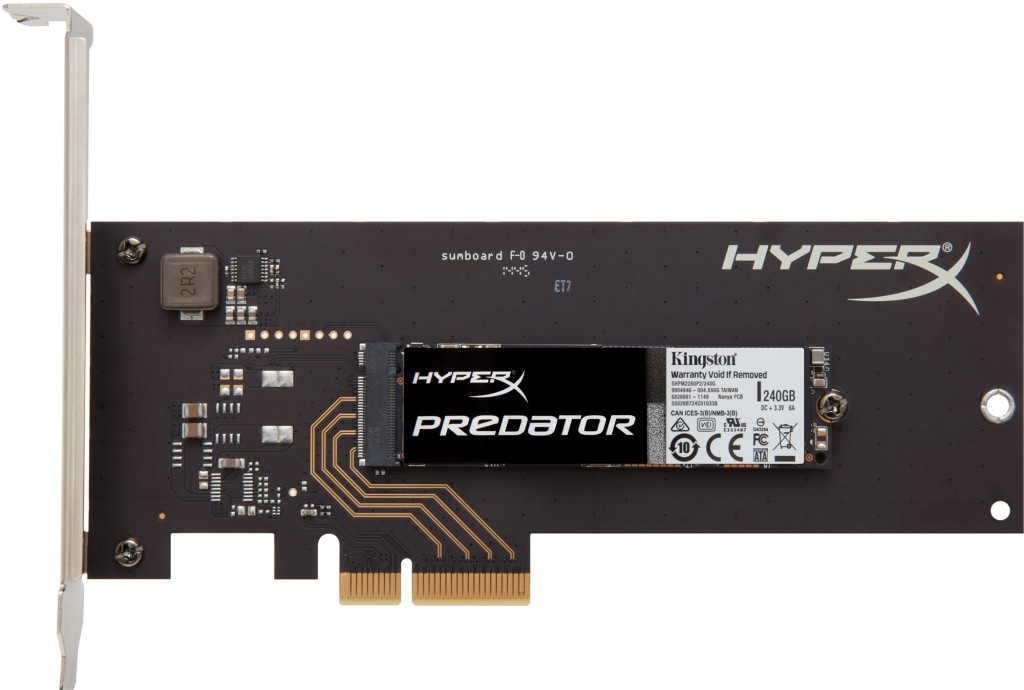 The new solid-state drives come in M.2 form-factor (with PCIe 2.0 x4 interface), but for those, who do not have an appropriate slot, Kingston will offer a version of the drive with a half-height, half-length (HHHL) adapter.

Due to maximum simplicity of the Kingston HyperX Predator PCIe SSD’s design (an M.2 card and a simple PCIe adapter), it is likely that it will cost much less than popular high-end PCI Express SSDs, such as OCZ Revodrive 350, which offer extreme performance, but at extreme price-points. Besides, thanks to the M.2 form-factor, the HyperX Predator PCIe SSD is also compatible with ultra-small form-factor systems, such as Intel NUC.

The 240GB and 480GB versions of the Kingston HyperX Predator PCIe SSD should be available shortly, whereas the 960GB flavor will be become available later in Q1 or even in Q2 2015.

KitGuru Says: If Kingston’s new HyperX Predator solid-state drives hit the market at price-points (in terms of price per gigabyte) comparable to those of Serial ATA-based SSDs, then they will clearly revolutionize the market of high-performance storage. The Serial ATA-6Gb/s limitation has clearly slowed down development of SSDs for well over a year now, but so far PCIe solid-state drives have been prohibitively expensive due to complex design and other factors. It now depends only on the manufacturers of drives whether PCIe SSDs will enter the mainstream market this year.