The market of solid-state drives is probably one of the fastest growing IT markets nowadays and the competition is pretty tough. While the war on the SSD market will probably oust many companies, including significant ones, several leaders of the market are already clear and they will likely continue to be the largest suppliers of SSDs in the future.

The SSD market soared to $10.9 billion (£6.3533 billion, €8.0192 billion) in 2013, despite NAND flash chip shortages and stable prices, according to Gartner. Top five SSD makers controlled 65.8 per cent of the market’s revenue in 2013, up from 55.4 per cent in 2012. All leading suppliers of solid-state drives had their own NAND flash manufacturing capacities (or co-owned them), which underlines importance of fabs for the flash storage market going forward. 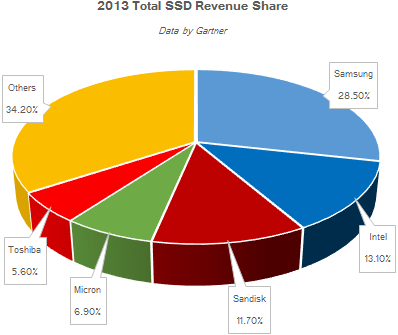 Samsung, the world’s largest supplier of NAND flash memory, maintained its overall lead in sales of solid-state drives with $3.1 billion in revenue. While the company almost does not supply high-end enterprise-class solid-state drives (SSDs) or solid-state storage solutions (SSSs), the firm managed to boost its revenue share to 28.5 per cent in 2013 from 23.2 per cent a year before (see below for details).

Intel Corp.’s revenue share of the SSD market dropped slightly last year to 13.1 per cent, but the company still maintained the No. 2 position and earned $1.4 billion.

SanDisk managed to rather dramatically boost its SSD revenue last year to $1.3 billion and thus controlled 11.7 per cent of the market. With the acquisition of Fusion-io, SanDisk has all chances to outpace Intel in terms of solid-state storage sales in 2014 and become the No. 2 supplier of NAND flash-based storage devices.

By contrast, Toshiba’s SSD earnings totaled around $600 million last year and its SSD market revenue share fell to 5.6 per cent. Toshiba co-owns NAND flash manufacturing fabs with SanDisk. It is likely that this year the company’s SSD sales will grow thanks to the acquisition of OCZ Technology in late 2013.

Micron Technology was the No. 8 SSD maker by revenue in 2012. In 2013 the company increased sales of various solid-state storage devices (including SSDs and SSSs) to about $800 million and became the fourth largest producer of SSDs in the world.

Gartner observed that 2013 was a remarkable year in flash storage, as evidenced by the most active acquisition frenzy in flash history. The 2014 will likely be a similar year as the consolidation on the market of solid-state storage is actively ongoing. 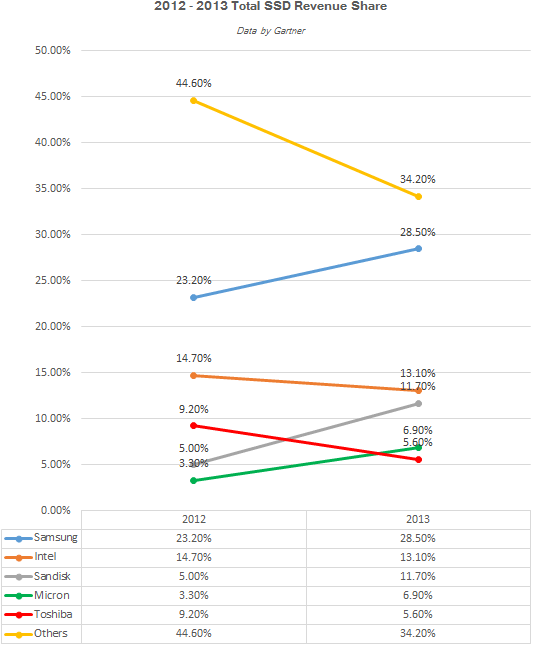 KitGuru Says: It will be interesting to see how the market of solid-state storage will evolve in the future. It is obvious that bigger players will continue to control the lion’s share of the market. However, it remains to be seen how important will companies like Seagate and Western Digital be going forward on the market of SSDs. Moreover, SK Hynix, a major maker of NAND flash, still has not really entered the market of own-brand solid-state drives. Since there are at least three significant players who have not yet established their positions on the SSD market, expect them either to aggressively expand, or to acquire existing players.