Toshiba Corp. has introduced the industry’s first single-package solid-state drive with the PCI Express 3.0 interface. The tiny chip will enable considerably higher storage performance on embedded devices or a massive reduction of size and weight of PC storage. To take advantage of the new product, mobile application processors will have to gain support for the PCI Express technology.

Toshiba’s BG-series single-package solid-state drive has 128GB or 256GB capacity, integrated NAND flash controller and uses the PCI Express 3.0 interface with NVMe 1.1 protocol. The device will be available as a ball-grid array (BGA) package (16mm*20mm*1.65mm dimensions) or as a very small form-factor M.2 module. The 256GB BGA SSD weighs less than one gram.

Nowadays mobile and embedded solutions utilise eMMC interface to connect application processors with NAND flash memory solutions (which are usually single-chip highly-integrated packages with built-in controllers). Even the highest-end eMMC 5.0 devices have up to 400MB/s bandwidth and support up to 128GB capacities. By contrast, PCI Express 3.0 x1 bus provides up to 985MB/s, whereas Toshiba’s BG device features up to 256GB of NAND flash. 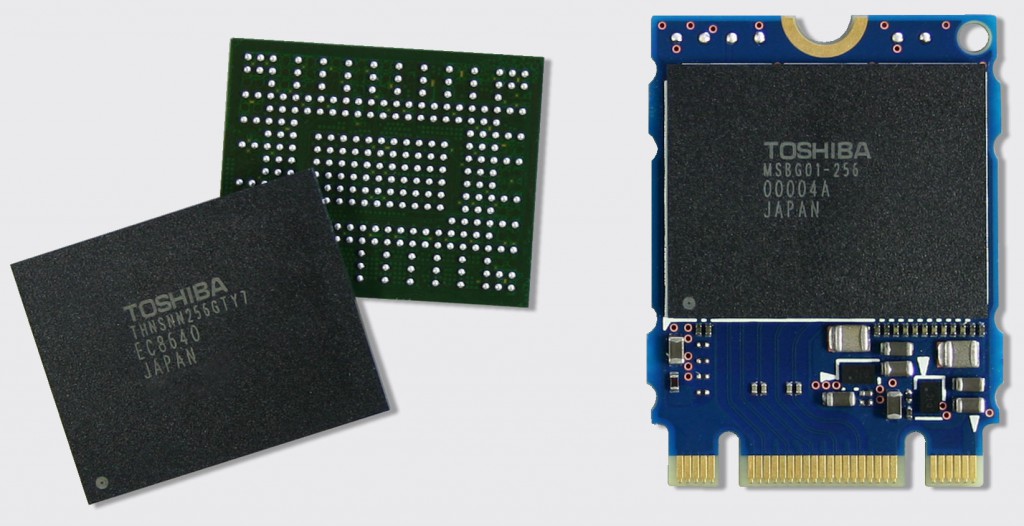 While Toshiba’s new BG-series BGA SSDs provide both capacity and performance improvements over eMMC solutions without increasing weight, the problem is that the PCI Express bus is not supported by mobile application processors due to increased power consumption, PCIe is only supported by PC-oriented components. A good news is that Toshiba’s BGA PCIe SSDs will be used inside tablets powered by the latest Intel Atom “Cherry Trail” or Core M “Broadwell” processors, which will enable massive performance amid minimal weight.

KitGuru Says: Toshiba’s new single-package PCIe SSDs are truly impressive, it is really a pity that even high-performance APs for mobile devices do not support PCI Express bus now. Perhaps, in the future, when M-PCIe gets more or less widespread, Toshiba will launch something similar for the low-power implementation of the most popular PC bus.