The story of OCZ in recent years is nothing short of incredible. From an organisation that became famous for its Reaper 8500 memory and low cost power supplies, it is now part of Toshiba, one of the only genuine memory manufacturers on the planet. KitGuru was lucky enough to catch up with its Vice President of Global Marketing, Tobias Brinkmann.

From the moment that SSD products launched into the market, OCZ became synonymous with solid state performance. For some reason, the drive team at OCZ understood that size and throughput were going to be crucial – and anyone who turned up for a chat with Tony and the team at CeBIT 2009, would have seen a 1TB Z-Drive in action. Yep, that’s a 1TB SSD five years ago.

Special deals with controller creators for early/exclusive access, ensured that the Vertex series topped the desirability charts for a long time and, thought industry insiders, everything was set for a deal with Seagate. For whatever reason, the hard drive giant pulled back from the deal.

Then, as if from nowhere, Toshiba stepped forward and snapped up the premium performance brand.

Right now, from the side lines, it’s looking like a huge win for OCZ and Toshiba and a huge loss for Seagate.

To fully understand the situation, where the companies are coming from and where they intend to go, KitGuru spoke with Tobias Brinkmann who is in charge of global marketing.

Tobias, what did you do before OCZ/Toshiba?
Hi, I started in the IT industry back in 2001 which now seems a lifetime ago. That was at Komplett, a company which pioneered and revolutionized online shopping in Scandinavia and today is the largest e-commerce player in region with over 14 webshops.

After more than 5 years at Komplett I joined OCZ, which at the time manufactured high performance memory and a number of other premium computer components. I stayed with OCZ for close to 4 years during which we transitioned our business to focus on SSDs. After a short stint in the consumer electronics industry, I returned to OCZ back in 2011 and here we are.

From the outside, it seems perfect. Toshiba is a genuine memory manufacturer, with impeccable quality, while OCZ has emerged as the performance brand in recent years. Together, this companies could form one of the key ‘SSD oligopoly members’ going forward – with Samsung, OCZ, Intel, Crucial, SanDisk and Kingston taking the lion’s share of the global market.

OCZ was among the very first companies to launch a consumer SSD back in 2008. Since then we have established a large IP and patent portfolio both through in house development and acquisitions. Our Barefoot 3 controller is one of, if not the highest performing controllers on the market, especially when it comes to sustained performance.

What we have been missing in the recent past is the direct access to NAND, which you need in the solid state drive market today in order to stay competitive and position yourself as a relevant player. There is no doubt that we are going to see the market consolidate further in the near future and, as part of Toshiba, I am confident we are going to grow and be one of the strong brands in the SSD space. 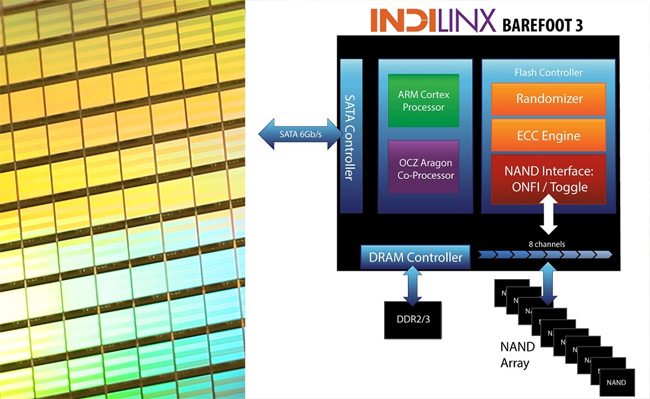 How does the acquisition affect warranty of previously sold OCZ products?
Toshiba acquired the company’s assets and not the liabilities, but we are pleased that the new organization is able to continue to support existing customers with current SSD products.

This supports the vast majority of consumers and all enterprise customers as our top volume products like the Vertex, Vector SATA and RevoDrive PCIe SSDs all continue to be supported. The Agility Series is already on the tail end of the lifecycle and we are able to provide one more year of support for this series.

All OCZ Storage Solutions products launched after the acquisition, as well as any future products, will come with warranty support.

Tell us about your new launches
That is correct, the launch of the Vertex 460 which uses Toshiba 19nm NAND, came just a few days after the acquisition had been announced. Our flagship consumer SSD, the Vector series, was already based on Toshiba NAND, now all our client drives utilize premium Toshiba NAND.

When it comes to our enterprise product offering, we recently launched the Intrepid 3000 series with Toshiba NAND and we are going to continue to transition other products in the near future.

Toshiba will continue its own development, production and marketing of Toshiba branded SSDs while the new company, OCZ Storage Solutions, will also continue to sell its own OCZ branded SSD products through its own well established global sales channels.