Patriot’s gaming division, Viper, launched its first venture into Gen 4 PCIe M.2 SSDs this month. Like other PCIe 4.0 SSDs, this one boasts very impressive specs, with read speeds of up to 5GB/s, giving the VP4100 a ten fold increase on traditional  SATA SSDs.

With the latest Ryzen 3000 and X570 platforms supporting PCIe Gen 4 we are sure to see a plethora of PCIe 4.0 M.2 devices being released in the coming months. Viper has been quick to set out their stall in this fierce market.  The VP4100 follows a similar theme to the recent Corsair MP600 with a chunky black heatsink design and white graphics. However, unlike Corsair, the Viper VP4100 is sporting a blue PCB instead of a black one.

Aesthetic differences aside, the VP4100 boasts excellent performance statistics, including sequential read/write speeds of up to 5000 MB/s and 4400 MB/s respectively. In addition, this drive is rated for 800K random IOPS peak read/write speeds, which is around 50K higher than other devices based on the same controller. 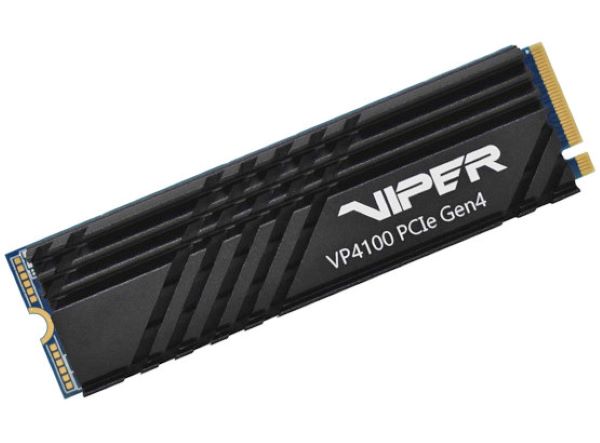 The Viper VP4100 is equipped with Phison’s PS5016-E16 controller along with 3D TLC NAND memory. To ensure the Patriot Viper VP4100 is consistent under high load, it has been fitted with an external temperature monitoring sensor and more obviously the black Aluminium heatsink.

Available in either 1TB and 2TB variants with a M.2-2280 form factor and a super slim and compact 3mm height, the Viper VP4100 will fit into almost any system build.

The Patriot Viper VP4100 is backed by a 5 year manufacturer’s warranty and TBW (Terabytes written) rating of 1800TB per 1TB. That’s good news and should mean the device is built to last. The Viper VP4100 is available now in both 1TB and 2TB versions via Amazon UK for £349.99 and £449.99 respectively.

KitGuru says: No doubt the performance statistics of the Patriot Viper VP4100 will appeal to enthusiasts and hardcore gamers, although the blue PCB could be divisive. What do you all think of the Viper VP4100? Are any of you looking to make the jump to a PCIe 4.0 SSD?