The RC100 series SSDs are built using Toshiba's own 64-layer, 3-bit-pe-cel TLC BiCS Flash, which we learned about last year. They are also equipped with an in-house developed SSD controller in a single package, allowing Toshiba to create a compelling option compared to other M.2 SSDs, which are usually very high-end. 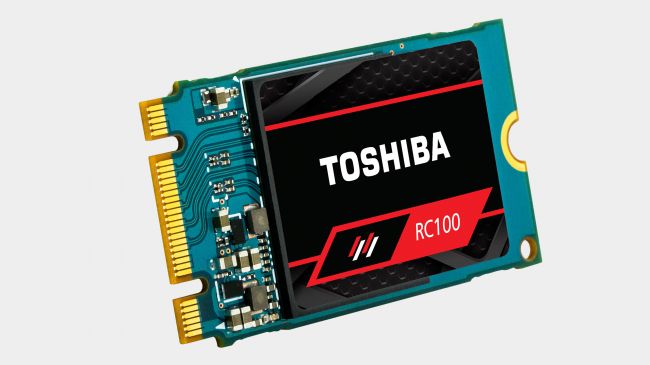 Speeds won't quite match those of high-end M.2 SSDs, but these drives will hit the ‘sweet spot' between SATA 6Gbps and high performance M.2 drives. According to Toshiba, the RC100 can deliver up to 1620 MB/s and 1130 MB/s in sequential read/write speeds. It can also achieve 160,000 and 120,000 random read/write IOPS without requiring additional on-board DRAM.

Specific pricing isn't mentioned on the press release, so while Toshiba says these M.2 drives will be accessible to the mainstream, we don't have the exact numbers to back it up just yet. However, we do know that the RC100 series will be launching in Q2 in 120GB, 240GB and 480GB capacities all backed by a three year warranty. We'll update when pricing information is made available.

KitGuru Says: I've been looking into picking up a 500GB M.2 drive for a while now but pricing is very high at the moment. Perhaps this year that will start to change if the RC100 series can prove competitive enough. Are any of you looking to upgrade to an M.2 SSD this year? How much would you be willing to spend on one?