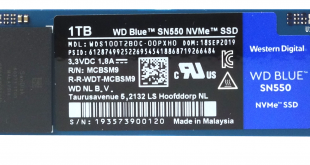 WD launched the first NVMe drive for the mainstream Blue range in April 2019, the SN500. Today we have the next generation Blue NVMe drive, the SN550 in for review. Just like its SN500 predecessor, it uses a combination of WD’s own in-house controller and 3D TLC NAND.

The new SN550 not only sees an increase in capacity from the SN500, but more importantly, the new drive has a PCIe x4 interface rather than a x2 interface and it ditches the 64-layer 3D TLC NAND in favour of 96-Layer 3D TLC NAND. At launch, there are three capacities in the SN550 range – a 250GB, 500GB and the flagship 1TB drive we are looking at here.

Endurance for the 1TB drive is quoted at 600TBW and WD backs the drive with a 5-year warranty.

Previous Minix unveils a range of Mini PCs coming to the UK
Next MLB: The Show will no longer be PlayStation exclusive; still developed by SIE San Diego