Intel Corp. this week revealed the name of its new-generation code-named Braswell system-on-chip that will power upcoming value notebooks and desktops. The new chip will be made using a leading-edge process technology and will combine relatively high performance, small footprint, low power consumption and low cost.

Intel did not reveal a lot of information regarding Braswell, except the fact that it will succeed the Bay Trail-series processors in various mobile and portable devices. But here is what we do know: the chip will be made using 14nm fabrication process and will belong to the Atom family of highly-integrated system-on-chips. Since the chip is to be manufactured using 14nm process technology, expect it to be based on the code-named Airmont x86 micro-architecture and feature Intel’s high-performance integrated graphics, e.g., Iris-series. 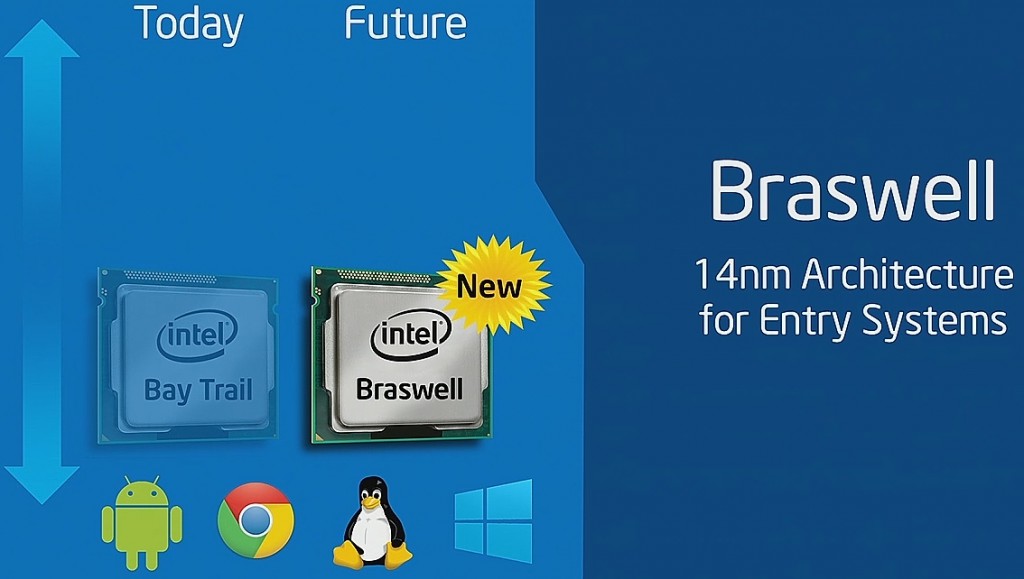 Basically, the Braswell looks like a higher-performing version of the code-named Cherry Trail chip for media tablets. So expect higher core-count, larger caches, higher clock-rates, improved graphics horsepower and so on.

The Braswell will be aimed mostly at low-cost notebooks, Chromebooks, affordable desktops and other systems that cannot integrate Intel’s higher-performing Core i-series chips.
Intel’s Kirk Skaugen declined to reveal when the new chip code-named Braswell is expected to arrive, but it is logical to expect it to show up on the market either late in 2014, or early in 2015.

KitGuru Says: Last year Intel announced plans to accelerate its Atom roadmap, speed up introductions of new low-power/low-cost products as well as to make those chips using leading-edge process technologies. By now, Intel should have a lot of interesting x86 (e.g., energy-efficient Airmont and Goldmont x86 cores)  and graphics solutions (low-power graphics, high-performance graphics, PowerVR graphics) up in its sleeve and it can relatively easily and quickly design SoCs to respond to market needs. Therefore, the Braswell could be a tip of an iceberg here with more interesting solutions in the pipeline.