As you’d expect, with the advent of a new Intel chipset, every major computer brand is pushing through new ranges of systems that promise to be better, faster and more feature-rich than anything you’ve seen before. KitGuru casts an eye over the interwibble and picks out one such newbie.

We live in a  world that divides, lopsidedly, into clockers and the rest.

The clockers are an exciting bunch, determined to drag every last ounce of performance from every component in their super-cooled chassis.

But that drive for performance, almost always, has a price.

There used to be a bunch of metrics about temperatures and product life cycles, which have been variously pushed and discarded by AMD/Intel/nVidia PR teams – depending on where their next advantage/weakness was likely to be.

That said, we have no doubt that running ‘cool and quiet’ should prove more reliable in the long term than ‘hot and loud’.

Like the man said in Blade Runner, the flame that burns twice as fast burns half as long.

Which brings us to the YOYOTech Warbird Z7, which has been launched at £1,279 with a spec that includes:-

We can’t be certain without detailed testing, but this must be pretty close to the fastest non-OC system that YOYOTech has ever launched.

If you’re looking for the ‘Rolls Royce effect’ of serious power, without ever needed to hear the engine, then this is likely to be an appealing bundle.

From a processing point of view, then the 780 will deliver most 4K games at smooth frame rates (i.e. 40-50fps) while the 8-thread processor, 16GB of memory and Samsung SSD should make short work of most image/video processing tasks. You can read more here. 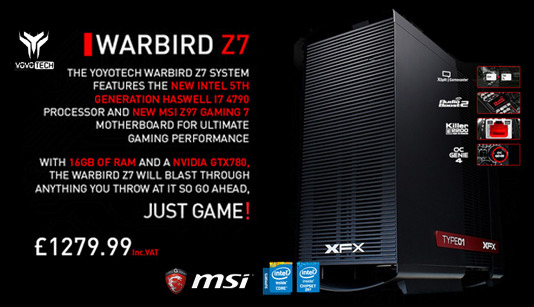 .
KitGuru says: Seeing the 5th generation Intel Core processors on a Z97 board is cool, we admit, but much cooler will be the full-blown monster rigs that seem destined to arrive early June. But they will probably cost more. Like everything to do with computing, if you see a spec/price combination that makes sense to you – jump in. If you wait for ‘what is coming next’, you will never buy one.

Let us know what you think about the new Intel Z97 systems over on Facebook.